Institutions with False Teachers and Heretics 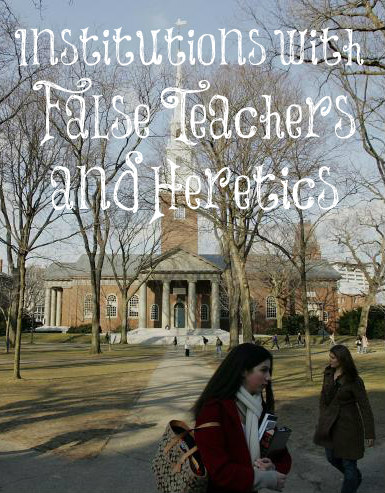 The subject of college education is not an easy one. As you know, I am NOT a fan of secular universities. I think they are a very dangerous place for Christian students. The day after A Powerful Keg of Dynamite was published and readers were disagreeing with me on my opinions, I read this in my Jeremiah Study Bible, "Nearly every NT letter speaks of it. Paul warned Titus to 'reject' the heretic, and he admonished the believers to 'withdraw from every brother who walks disorderly.' Peter also warned Christians to stay away from false teachers, and John encourages believers not to participate in any way with deceivers." Yet, we think it's okay to send our children to institutions with many false teachers and heretics??? I just don't see how Christians who think it's okay to send children to Universities match this with Scripture. I have noticed that not one of those arguing against my post used Scripture to argue their case. I refuse to listen to false teachers. Why is it okay to not only have our children listen to them but support them financially? If anyone can use Scripture to answer these questions, I'd love to hear it!

If your view is that Christians need to be on the campus' to be salt and light, then go on the campus' but don't pay to listen to the professors' teaching things we are clearly warned about in Scripture. Maybe if all Christians refused to support and attend secular Universities, they would fail or better yet, begin teaching things that aren't so contrary to God's Truth. We need more true Christian universities for our young people to attend. The study of the Bible should be mandatory and godly speakers for chapel.  If we keep eternity in view and not just the here and now, we would be MUCH more careful about the souls of our precious children.

Besides the heretical teaching at the universities, they do NOTHING to prepare or at least encourage women to be wives and mothers; quite the contrary actually. They teach them how to be feminists; strong, aggressive, independent, and in no need of a man. Many women get deep into debt by going to them in order to get a career and then are trapped in their career to pay off their debt.

Then we can't even speak about what goes on in the dorm rooms. For it is a shame even to speak of those things which are done of them in secret {Ephesians 5:12}. Parents send their 18 year olds to an institution where there will be other 18 year olds from all over and most of them have no faith at all. Now, they are no longer under any parent's authority and chaos ensues. No, thank you. There was no way we would send any of our children to an institution like this. Alyssa went to a Christian ballet company where they traveled all over spreading the Gospel. Ryan, Steven and Cassi all went to BIOLA; the Bible Institute of Los Angeles where most of their friends were raised in godly homes and there are godly professors and strict codes of conduct.

Are they not prepared now because they were raised in a Christian environment most of their lives? No, they are all prepared since they are now out in the world being salt and light. They were all firmly rooted in the Word of God and His ways before they could influence society around them instead of society influencing them. As ye have therefore received Christ Jesus the Lord, so walk ye in him: Rooted and built up in him, and established in the faith, as ye have been taught, abounding therein with thanksgiving {Colossians 2:6, 7}