Men Giving Up on Marriage 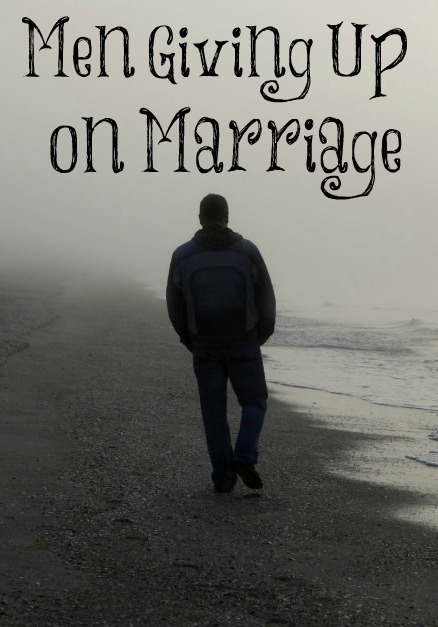 According to this article, men are giving up on marriage. With the divorce laws and feminist movement, many men just don't feel getting married is worth it. In past generations, men and women knew what their roles were and marriage was simple. The husband worked hard to provide for his family, while the wife stayed home and cared for the home and children. It's rare to find this anymore.

More women are in higher education and getting careers than men, thus taking the place of men and many men have no work and fail to get into higher educations institutions since the women are taking their place. The same is happening in the job market. More women are taking over the jobs that used to be held by men. "Women are 'tough and independent' and men don't think they're needed anymore. With feminism pushing them out of their traditional role of breadwinner, protector and provider - and divorce laws increasingly creating a dangerously precarious financial prospect for the men cut loose from marriage - men are simply no longer finding any benefit in it."

When I ask them why, the answer is always the same: women aren't women anymore. Feminism which teaches women to think of men as the enemy, has made women 'angry' and 'defensive,' though often unknowingly. Now the men have nowhere to go. It is precisely this dynamic - women good/men bad - that has destroyed the relationship between the sexes. Yes somehow, men are still to blame when love goes awry. Men are tired," Venker wrote. "Tired of being told there's something fundamentally wrong with them. Tired of being told that if women aren't happy, it's men's fault."

"It's the women who lose. Not only are they saddled with the consequences of sex, by dismissing male nature, they're forever seeking a balanced life. The fact is, women need men's linear career goals - they need men to pick up the slack at the office - in order to live the balanced life they seek."

Wow! These are powerful words to ponder, women. In seeking to have equality and be like men, we've lost femininity and the romance we all so greatly hunger for. Feminism only looks at the short-sighted goals instead of pondering the long-term destruction for society, families and mostly children.

We are Christian women who must go back to God's calling on our life and have nothing to do with feminism, but instead seek to be feminine. We must seek to please Him in all that we do. He calls women to be their husband's help meet, to submit to and obey them. He calls us to love and please our husbands and to fulfill their sexual needs. He calls men to provide for their families. The farther we get away from these roles, the worse every one's life becomes, especially the children. Go back to the biblical path and reap the bountiful fruit of doing life God's way. Go back to the old paths; to the good way. You will never find rest for your souls any other way.

Thus saith the LORD, Stand ye in the ways, and see,
and ask for the old paths, where is the good way,
and walk therein, and ye shall find rest for your souls.
Jeremiah 6:16

***Why Your Family is So Important. "The American Psychological Association has taken issue with the kind of dolls that are being created for our daughters. Where once they were give baby dolls and dolls that they could role play with, now they are being given dolls with pouty lips and fishnet and high heel boots and parents must not understand this; that what a girl plays with a doll is just practice for what she will become when she is older."