Wisdom from The Joy Filled Wife 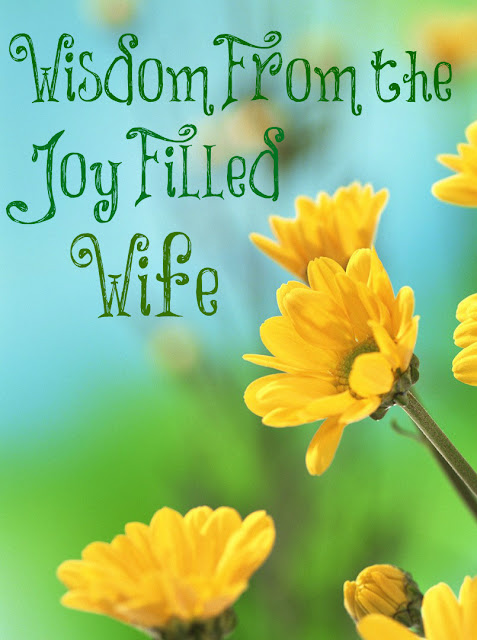 Women have emasculated men so much that they are no longer even attracted to them. Our family has chosen not to have a television for many years now, but on the occasion that they are with a grandparent and are watching a cartoon with them, there are many seemingly innocent shows we won't let them watch because the mom is always acting like the dad is just another one of her children. It's inferred that men are incompetent. It drives me absolutely nuts and it's in almost everything. Children are "taught" at a very young age to look down at men.

On the other hand, I do think that, in this culture, women who fear the Lord and have a Biblical view of marriage can be intimidating to most men. A lot of men, even in the church, have grown accustomed to not having much required of them because of the feminist movement and women being so extremely independent. There were many men who were interested in me before I met my husband {I was not into casual dating, however}, but they knew that I held to the Biblical roles for marriage and that was just too much responsibility to them. They wanted a woman who would take the reins so they didn't have to and I was not about to do that. When my husband walked in the door, he literally took the world by storm. He is a leader type through and through and would never have married a woman who tried to fulfill his Biblical role. He just had to wait a while to marry because it was so hard to find a woman who follows the Bible on this.

The other night, my husband asked me what kind of things I thought about my future husband doing for me when I was single. I told him that I didn't think of my future husband doing anything for me at all. I knew I wanted a strong Christian man who would fulfill his role as the head of our household as stated in the Bible but, honestly, I didn't think about what I wanted done for me but what I could do to help under gird him.

Every day when I would pray for a husband, I would say, "Lord, please give me a man I can serve." When I said that, my husband laughed out loud and said, "Boy, you better be careful what you pray for, honey! I think you got way more than you bargained for in that area!"

My husband is a Command Man through and through and, such as kings do, they want to constantly be served. It's an extremely demanding job, but it's God's ways for a wife and I would rather go to bed exhausted at the end of the day in obedience to the Lord than a bitter, independent, rebellious woman who does marriage the world's way. Sadly, the concept of leading a wife has become so stigmatized in the modern church that most Christian men think it's more trouble than its worth. How different our churches and families would look if we did things God's way.

One of the things my husband said attracted him to me was how knowledgeable I was about politics and how unusual it was for him to meet a Christian woman with a Biblical worldview in that arena. The funny thing is that none of my siblings ever had any interest in politics. I didn't at first, but it was a subject that was important to my father and I decided to learn about it at a young age as a way to spend time with him and to show interest in what he was interested in. I eventually became interested over time as well. God knew that an interest in politics would be important to my future husband, even though I had no way of knowing ahead of time. I always encourage wives to learn about and show interest in the things their husband is interested in. It doesn't have to be every single thing he likes, but the things that are higher on his list that he desires to share with you.

When our kids get to a certain age {young by most standards}, they begin to learn how to prepare some basic meals. Most mothers don't want to take the time to teach their children how to read, clean, cook, converse, etc. because it's time-consuming initially. It takes time, sure, but it saves so much time in the long run and actually prepares them for being successful adults. My girls can easily change the worst of diapers by the time they are four years old and that's a handy skill to learn. One of our young children received Financial Peace Jr. by Dave Ramsey for Christmas instead of toys. We only keep a very small amount of toys in the home and they become very creative with regular household items. They will be absolutely ecstatic when they see it! That particular child is a "Go-To/Creative" child and positively glows with any chance they have to be in charge and responsible for things. We have a lot of strong personalities in our home and I always joke with our oldest that we will never have a shortage of people willing to be in charge of something. In fact, with me being probably the least naturally "in charge" personality in the home, I have the fun and creative job of delegating different responsibilities to different children and letting them lead in that special area after they've been equipped for the task. That is a skill that many women waste in the work force when they could raise up those qualities in their children.

The qualities it takes to run a home is no meaningless requirement and the reason so many children lack basic self-control, discipline, and life skills is because Mom is usually too busy pouring her energy into people outside of her home.

She looketh well to the ways of her household,
and eateth not the bread of idleness.
Her children arise up, and call her blessed;
her husband also, and he praiseth her.
Proverbs 31:27, 28