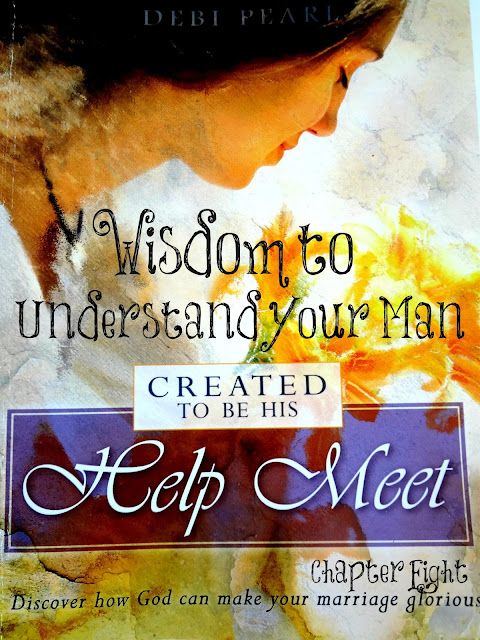 The very first time I ever heard of Debi Pearl was when I read an article with the information from this chapter. I don't remember where I found it but I loved it! I made copies and gave it to my mom and sisters. My mom then bought us all a copy of her book. Many times when I mentor women, I encourage them to read this chapter first so they can understand their man and his personality. Once we understand our husband, it's much easier to be sympathetic to their struggles and appreciate their strengths. When you come to know your man for whom God created him to be, you will stop trying to change him into what you think he should be.*

Ken is a command man. As soon as I read all about Mr. Command Man I knew it described him. He is a born leader and will usually do MUCH more than is required of him. As I have grown into becoming a more submissive wife, I have learned how to make an appeal to him without challenging his authority, especially since he knows what I teach and how I am supposed to behave. {Some women who I mentor will hide this book from their husbands since they don't want to be held accountable for being a godly help meet!} Ken has struggled with gentleness since this is a character trait that most command men struggle with, however, he has gotten so much gentler with age and maturity in Christ.

There have been many accusations thrown at the Pearls that they support physical abuse by a husband. However, the Pearls make it very clear that they are against it. "Of course, there are a few men who are so cruel and violent that even when the wife is a proper help meet, he will still physically abuse her or the children. In such cases, it would be the duty of the wife to alert the authorities so that they might become the arm of the Lord to do justice."* I have the first edition of this book so this statement has always been in this book so those who accuse the Pearls of supporting physical abuse {and there are many} are lying and slandering them without just cause.

My sister, Debbi, is married to a Mr. Visionary. She tells us she should have known when they first met each other since he was talking about digging wells for water in Africa. He definitely has a heart for the poor and needy! These men have tunnel vision, tenaciously focusing on single issues. They will easily pick up and relocate without any idea of what they are going to do for a living at their new location.* One of my nieces married a visionary man and my sister told her, "Make sure you buckle your seat belt since it's going to be a wild ride!"

My other sister, Alisa, is married to Mr. Steady. My dad is a Mr. Steady. He will selflessly fight the wars that Mr. Visionary starts and Mr. Command leads...He will be faithful till the day he dies in the same bed he has slept in for the last 40 or 50 years.* Most of the women I mentor who are married to a steady man after they read this chapter come to a deep appreciation of their man. They stop expecting him to be somebody he isn't and they become satisfied with who God created him to be.

A wise woman learns to adapt to her husband.* Whether or not your husband is a command, visionary or steady man or even a combination of the three, we are called to adapt our lives to our husband and become their help meet, instead of trying to change them into what we want them to be!

And the LORD God said, It is not good that the man should be alone;
I will make him an help meet for him.
Genesis 2:18

**If you don't have the book, HERE is a condensed version of this chapter.
*All quotes from the book.