The Nature of Man and Woman ~ Chapter Eleven 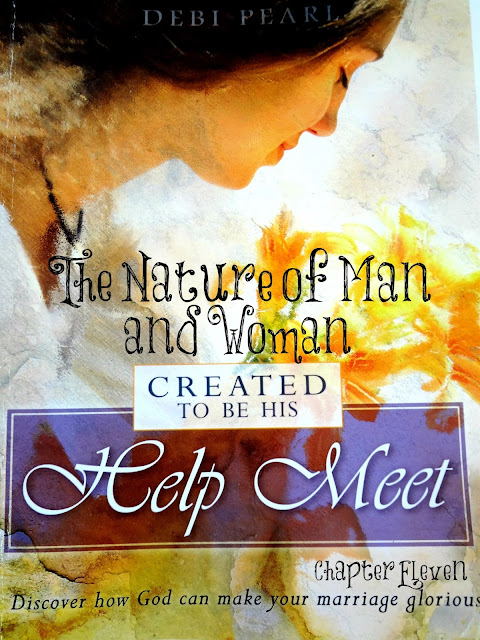 Men and women are different as I have written about many times. Men have ten times the testosterone we have and they like to conquer, whether it is new land, enemies or a woman. This is their nature to do so. We have buildings, freeways, cars, airplanes, etc. because of their drive and ability God has given them. Men are also good at seeing the whole picture, which is why God created them to be the leaders. Men's nature is doubtful, skeptical, forceful and pushy.* {This can drive us crazy at times, right?} Did you know that neither Bill Clinton nor Obama would have been elected President if women didn't vote? Women used to be for abortion in far greater numbers than men. {This isn't a post to argue that women shouldn't vote. I am simply stating facts.}

I wrote about the dangers of Jesus Calling a while ago and the author stating, "‘I knew that God communicated with me through the Bible, but I yearned for more." Do you wonder why Satan went to Eve instead of Adam? Women are more sensitive and emotional so are more easily deceived, as the Word states {1 Timothy 2:13, 14}. Eve did not follow logic; she followed her "sensibilities." She wanted "deeper" spiritual insights than those provided by God.* This statement reminded me of Jesus Calling. Sarah wanted more than the Word of God so she spoke as if Jesus was speaking and wrote a book. No thanks! Did you know that women are either directly or indirectly responsible for most of the past and present cults in Christianity?*

Man's objectivity and lack of intuitiveness make him appear less spiritual than the sensitive believing female.* This doesn't make one sex better than the other, just different and for their created purpose they are wonderful! God created women to marry, bear children, guide the house, give none occasion to the adversary to speak reproachfully {1 Timothy 5:14}. This is what we are created to do. This is why we have a sensitive and emotional nature to bear and raise children, not to try to take the place of men in society since we weren't created with the long-term vision and strength that God gave men.

There was a discussion in the chat room about "baby fever." Some women wrote that they didn't desire children; they didn't "feel" like having them. Our feelings lie to us; never trust your feelings. I explained to them that it doesn't matter if they have baby fever or not or if they feel like having children or not. If they want to walk in obedience to the Lord, they will have children if they are able! I don't "feel" like being submissive at times or being joyful or not getting angry but I try do the right thing because I love Jesus and am so thankful for what He has done for me; it is the least I can do for Him. Never allow your feelings to get in the way of obeying God and doing good.

Then Debi wrote about the Jezebels among us. Any woman who defies the scripture's prohibition against women teachers in the Church is following in the grave tradition of Jezebel.* Besides not being leaders in the Church, we also should not try to be the leaders in our homes even if we think we are better leaders than our husbands, since our husbands will lose their natural drive to bear responsibility.* God created men to be the leaders, providers and protectors but in our "liberated" society with so many women working and having careers, it has taken away many men's desire to provide and turns God's created order on its head; chaos then reigns, as it does today.

Ruth, Esther, and the virtuous Proverbs woman are provided as examples to you of what we should aspire to be. Ruth had a thankful and submissive attitude with a willingness to work very hard. Esther was put in a difficult situation but she willingly allowed the Lord to use her to save her people. She was submissive to God's will in her life. You are also called to be women of virtue and a crown to your husband. God's created role for you is the best role you will find. You may look elsewhere but it will never come close to what God has ordained for you.

It is important for a woman to understand that she must be feminine {devoid of dominance and control} in order for her man to view her as his exact counterpart, and thus willingly respond to her protectively, with love and gentleness.* We will reap what we sow, women. You will never have a man who cherishes you if you insist on doing it your way. Once you give up your desire to have your way and instead obey God, you will be utterly amazed at how your life will fall into place. God is your Creator and His Word is your Instruction Book. Read it and live life the way He designed for you to live it. Stop depriving yourself and your husband of God's best for you.

For my thoughts are not your thoughts,
neither are your ways my ways, saith the Lord.
Isaiah 55:8