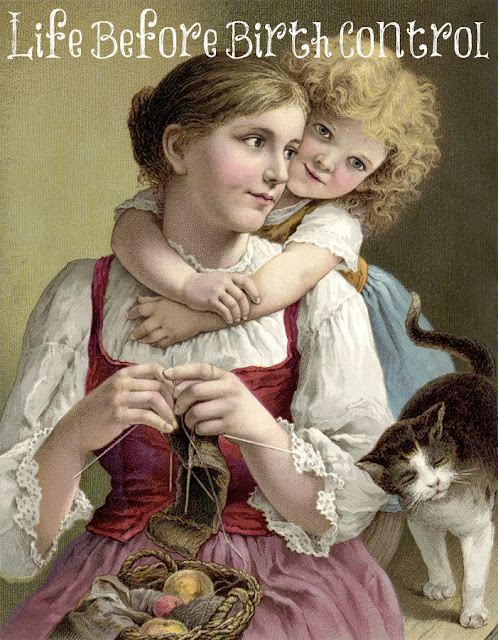 Think back with me in America before 1950 when there was no birth control. Most men married early since being promiscuous could easily lead to pregnancy and most men didn't want this responsibility without marriage. If they did get a woman pregnant, they would marry the woman whom they impregnated since this was the proper thing to do. There was no such thing as "safe" and legal abortions. Once a woman had a child and was married, she was home full-time with her children since this was what women knew they were supposed to do. If they had a job, they were fired once they got married so they could be at home and care for their husband and home until they did become pregnant. Most families had anywhere from five to more children. The average number was around six. The children were disciplined according to biblical principles and taught the Bible in school. Most people owned guns but no one went into classrooms and shot children dead.

Men knew they were the providers back then since everyone knew once a couple got married, they would probably begin having babies and the mothers needed to be home caring for them. Little girls grew up knowing they would probably get married and have children so they were ready and most were excited about having their own husband, children and home. Their mothers had prepared them for this very important role. Life was easy when there weren't a lot of "choices" for them to make. Therefore, they were content in their role of being home with their children while their husbands worked hard to provide for them. Was it a perfect time in the history of America? Of course not. Racism was an ugly and evil practice in America that should never have existed. Life on this earth will never be perfect but men worked hard to provide, women worked hard at home and cared for their children, and the family unit was strong, thus our nation was strong after the Civil War which ended slavery.

Then came Margaret Sanger who was determined to bring birth control into America. She felt women were in bondage having to be home raising all the children they bore. “The most serious evil of our times is that of encouraging the bringing into the world of large families. The most immoral practice of the day is breeding too many children,” she wrote.“The most merciful thing that the large family does to one of its infant members is to kill it,” she continued. {Google "Margaret Sanger quotes" and you will see what an evil woman she was and all of her reasoning for bringing birth control to America. They are all wicked.}

I have stated before that I hate birth control and the destruction it has caused in our nation. Sexual promiscuity keeps getting worse. Millions of babies have been slaughtered. Women can put off having babies to pursue careers as long as they want. Most couples only want one or two children; not enough to "multiply" as the Lord commands. Many more bad and ugly things have come from birth control than good.

Most people before the 1950s lived according to biblical principles or at least knew them since the Bible was accepted. They obeyed the Word by getting married and being fruitful and multiplying. Men worked hard and women stayed home with their children. Just because we live in a society that champions women's right to choose their life's path and blasphemes the Word of God doesn't mean we should do the same. We must continue to choose God's path for us which is clearly spelled out in His Word by walking in obedience to His commands.

The aged women likewise, that they be in behaviour as becometh holiness, not false accusers, not given to much wine, teachers of good things; That they may teach the young women to be sober, to love their husbands, to love their children, To be discreet, chaste, keepers at home, good, obedient to their own husbands, that the word of God be not blasphemed.
Titus 2:3-5