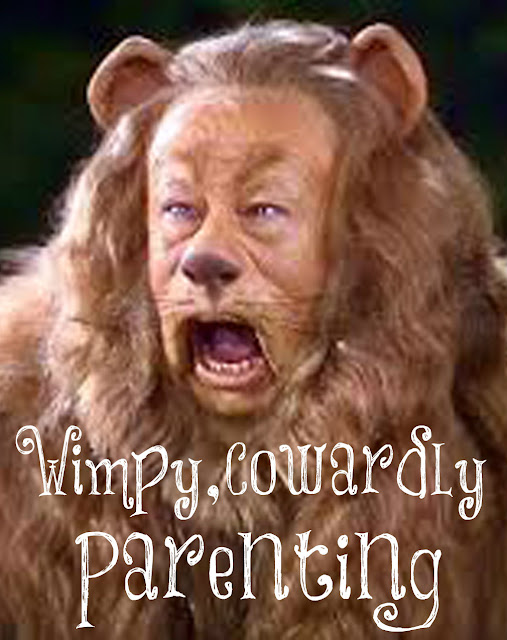 Do you ask your children to do something or do you tell them? When you ask them, you are giving them a choice as to whether or not they want to obey you. If you tell them what to do and have trained them to obey you immediately, they will do what you have asked. Today's parents ask their children to do things; "Will you pick up your toys?" "No," answers the child, "I don't feel like it right now" or "I'm too busy playing video games to do this." Too many of today's parents have no clue how to raise their children and it is because they have gone so far from God's Word in this area.

Leonard Sax has written a great book about this topic. This is the generation of self-esteem and entitlements. Parents are no longer parents but are afraid of their children. They think if they're strict with their children, their children will grow up to not like them. However, studies have proven that children grow up loving the parents who are stricter with them than more lenient because they learn to be disciplined adults. “Most American parents are completely confused and going utterly in the wrong direction,” Sax said. “There’s a collapse of understanding what parenting involves.” The hierarchy of parent over child no longer exists, he said. Instead of parents exercising their authority because they know what’s best, they are focusing on making children happy and boosting their self-esteem.

Dr. Sax goes through a list of things to help raise better children: have family meals, take screens out of the bedrooms, limit screens usage, teach humility, and be a parent to your children. These are all great things and I recommend them for all parents with their children. Sax cites numerous research studies that found that a lack of parental authority is why obesity is on the rise, why more kids are on anti-anxiety and attention deficit disorder medication, why children are a culture of disrespect, seem fragile, and why American children no longer lead the world in education.

Michael Pearl has a different view. God's Word commands parents to use the rod for a reason. "The rod can bring repentance, but it goes much deeper than that. The rod in the hands of a discerning parent who will supply the child’s soul with that moment of judgment that he feels he so deserves. Properly applied, with instruction, it will absolve the child of guilt, cleanse his soul, and give him a fresh start through a confidence that all indebtedness is paid.” You shall strike him with the rod and rescue his soul from Sheol {Proverbs 23:14}. {Contrary to popular opinion, the Pearls do NOT teach child abuse! Read their book for yourself and you will see that they do not. He recommends calling the authorities if there is any physical abuse. Part of loving a child is disciplining them the way the Lord has commanded we discipline them.}

I was at the park the other day with my grandchildren. There was a young dad there with his two year old daughter. We got to talking about discipline and I asked him if he spanked his daughter and he responded, "No, but there are sure times when I wish I could. My wife's best friend has her masters in child psychology and told us of all the harm spanking does to children. We have friends that have five and seven year old daughters that are the sweetest children I've ever been around. I asked them what they did to teach their daughters to be so sweet and they told me they spanked them."

Then he showed me these bloody scratches on his hands from his daughter scratching him. He has no idea how to make her stop. I asked him if he was spanked as a child and he said he was. I went over to him and told him, "You know you are the man of the family. You should be able to spank your daughter if you feel this is what she needs." I could tell he was very agitated by my words because he knew I was right and his wife's friend was wrong. He told me spanking was so fast and effective and all of his friends where spanked when they were young. I can tell you right now our children would have never gotten away with giving us bloody scratches on our hands. Modern psychology teaches wimpy, cowardly parenting and children are suffering as a result.

All children will chose to sin. They know they have sinned and should be punished. Yet, many parents are at a loss as to what they should do with a child who has disobeyed them. They believe that all they have to do is love the child and try coaxing them towards obedience. We can do all those things this doctor has suggested but it still may not produce disciplined children. Children need to be disciplined. A couple swats on the fanny teach children obedience quickly. Nothing works better than this.

He who withholds his rod hates his son,
But he who loves him disciplines him diligently.
Proverbs 23:24
picture source