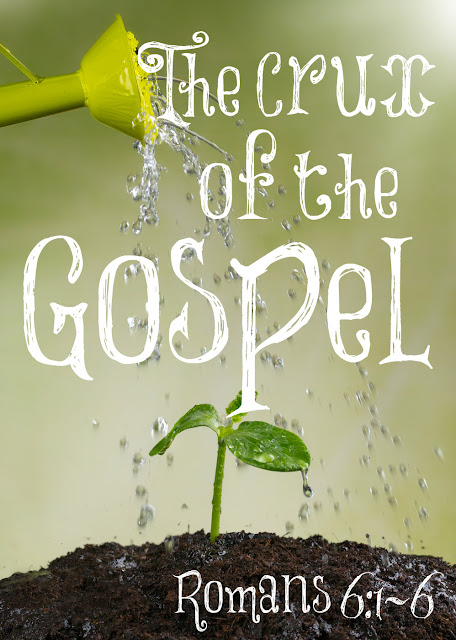 Romans six through eight are the crux of the Gospel. "The believer is taken out of the death of Adam to be placed into the death and then the life of Christ!" This is a thrilling and life-changing study. I have been teaching the book of Romans to the chat room the past few months but have decided to teach these three chapters in posts so I will have them for my reference. These three chapters were life changing for Ken and me and many who have understood the depths of what Christ's death on the cross accomplished for all who believe. I will be teaching you from Michael Pearl's teachings as well as some thoughts of my own.

Paul has just told us in the previous chapter that "where sin abounded, grace did much more abound" {Romans 5:20}. The introduction of the Law, which explained sin, caused sin to abound since everyone knew right from wrong now and this lead to grave consequences, but God's answer to this was much more abounding grace through the death of His Son. Therefore the next question some may ask is...

What shall we say then? Shall we continue in sin, that grace may abound? {Romans 6:1} Many will use the occasion of God's grace to say they can now sin. Is this what Christ came to die for; that we may sin more? Is grace limited to the power to forgive and pass over sin? It's disheartening to hear so many Christians using grace as an excuse to sin and cover their continuing sin.

God forbid. How shall we, that are dead to sin, live any longer therein? {6:2} "God forbid" is the strongest negative possible. Here Paul is introducing an amazing new concept. Continuing in sin is NOT an option for those that are dead to sin - dead to the power of sin to reign over the body of flesh. We are dead to sin!!! {Paul will repeat this type of phrase six times in this chapter, hence I will underline them for you to notice.}

Know ye not, that so many of us as were baptized into Jesus Christ were baptized into his death? {6:3} This is NOT water baptism. This is an immersion into Christ. For as many of you as have been baptized into Christ have put on Christ {Galatians 3:17} and Buried with him in baptism, wherein also ye are risen with him through the faith of the operation of God, who hath raised him from the dead {Colossians 2:12}.This baptism, which places the believer into the death and resurrection of Christ, is done by the operation of God; that is, God is the baptizer! {So many verses in the Bible will make sense once you understand all of this truth.}

Therefore we are buried with him by baptism into death: that like as Christ was raised up from the dead by the glory of the Father, even so we also should walk in newness of life {Romans 6:4} When Christ was buried, the believer was buried with Him. Christ's history becomes the believer's history. The newness of walking comes from a new life; the life of Christ.

Knowing this, that our old man is crucified with him, that the body of sin might be destroyed, that henceforth we should not serve sin {6:6} “Knowing this…” The believer’s co-crucifixion/resurrection with Christ is not something to which we aspire, but it is a past fact we are to know! The “old man” is history. Therefore if any man be in Christ, he is a new creature: old things are passed away; behold, all things are become new {1 Corinthians 5:17}. We are a brand new creature!

The new man now sustains a relationship only to Christ and not to Adam. The old man is crucified with him. Paul is not challenging us to "die to self," as many have maintained. We are not told to seek crucifixion. Crucifixion with Christ is not the goal, but the very historical event on which we originally entered a relationship with Christ the moment we repented and believed in Him. Being baptized into Christ, we are placed into his death, thus freed from Adam so we can be married to Christ {Romans 7:1-3}. I am crucified with Christ: nevertheless I live; yet not I, but Christ liveth in me: and the life which I now live in the flesh I live by the faith of the Son of God, who loved me, and gave himself for me. {Galatians 2:20} This crucifixion results in the body of sin being destroyed. Now believe it to be so! This, my friends, is the freedom we have in Christ.

The next verse begins HERE.