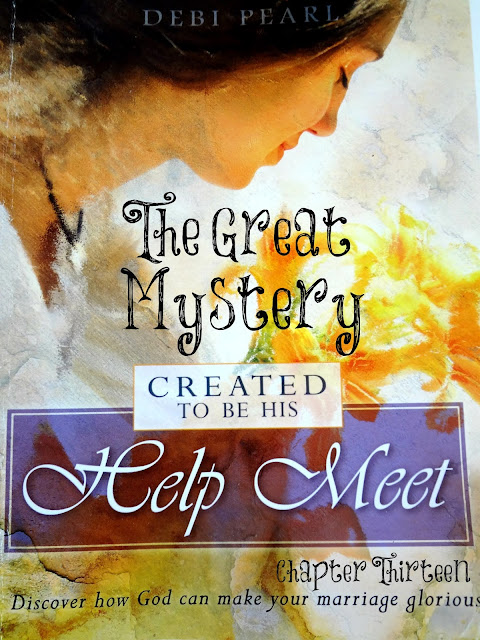 There are many who disdain Debi's book. This chapter has a story in it that is one of the reasons. Debi uses extreme examples in her book to encourage women that if these women can win their husbands without a word by their godly behavior, others in difficult marriages may also be able to win their husbands. If she used light examples, it wouldn't reach those women in horrible circumstances but since Debi has witnessed God's miraculous ways heal a marriage when a woman decides to follow His plans for her, it causes other women to have hope that their marriage may one day be healed.

Sunny was a foolish woman who married a wicked man. He even tried to kill her with a butcher knife when she was pregnant. She was plotting how to kill her husband when Debi found her in a "huddled, sodden mass of tears and exhaustion." Debi gave her the option of leaving him or trying to win him with a word. When I saw Debi in person at their conference, this story was brought up to Debi and Debi replied, "I thought for sure she would leave him in a hurry. I was shocked she wanted to stay!" Debi in no way encouraged her to stay. She gave Sunny the option and for this, many find fault with Debi.

They believe Debi is encouraging domestic abuse but she is not. She is using this story to show the power of a godly wife and the effect it has on her husband. She gave the same advice the Bible gives; a woman who is suffering and is married to a disobedient husband may win her husband without a word by her godly and submissive behavior according to 1 Peter 2 and 3. Who are we to disagree with Debi and argue against the Lord's ways? {Although, if a wife is being physically abused, she should call the authorities. Debi has mentioned this in other parts of her book.} This husband came to know the Lord and now he will spend eternity with Jesus. Sunny had decided her husband's soul was worth the sacrifice of staying with him and trying to "win him without a word." She had grasped an eternal vision about life, and she now believed God could save her man.*

God's Word to women that they may win their husbands without a word by their godly and submissive behavior is a great mystery that isn't given to men. Few men are able to continue being angry, lustful, and selfish in the face of such a strong force as being reverenced....In today's churches, many women have failed to win their husbands because they have tried to be evangelists instead of wives.* Always remember that you are your husband's wife and help meet, not His Holy Spirit or mother.

I have mentored women whose husbands were having affairs, deeply addicted to porn or alcohol, or decided they no longer loved their wives. It's heartbreaking but these women decide they will do everything they can to win their husbands without a word, so they go about learning to be submissive and godly women of God. They have decided that they are covenant keepers until death do they part. They care more about their husband's soul than their own happiness. This is completely contrary to how most women view marriage today or how those in the church even counsel women in difficult marriages. They think marriage is for their gratification, happiness and pleasure, instead of being an example to a watching world of Christ and His church.

Another example that infuriates people that Debi used is the wife who has a husband who goes to strip clubs and meets with prostitutes. {This reminded me of the Josh and Anna Duggar situation.} This wife decided to be a covenant keeper and learn to reverence her ungodly husband even though he was not worth it, as Anna is doing. "This is just evil," many proclaim. NOT SO! Have you ever read the book of Hosea in the Bible? This is a picture of Christ's love for the Church. He keeps taking her back, even in her wretchedness. He cares more for her soul than for anything else. We are called to love and forgive as Christ has loved and forgiven us. Can you imagine what an incredible example of Christ's unconditional love for us these women are to the watching world? God can use women who are willing to obey His commands, even in the difficult times, to bring glory to Himself. She has covered a multitude of sins with her love and forgiveness {1 Peter 4:8}.*

Yes, most men struggle with their sexual nature as we struggle with our emotional nature. Thankfully, most of us don't have to worry about our husband visiting strip clubs and prostitutes but most of us are good at building up roots of bitterness towards our husbands for things that they do and say. We take our husband's faults and replay them in our thoughts over and over again... we give him the stone-cold, silent treatment.* We must learn to take every thought captive to the obedience of Christ and begin believing the best of our husbands so we can get on with the blessings and joys of life and marriage.*

"I can see why women hate this stuff and why they wouldn't want to become a Christian if this is what a Christian life looks like." We walk a narrow, difficult road, woman, that leads to life everlasting. We choose not to walk on the broad path that leads to destruction. We are called to deny ourselves, be living sacrifices and please the Lord; not live the way others in our culture are living. We should look different than the world. We should look like Jesus and He stays with us even when we are disobedient. Therefore, why shouldn't we do the same to the one we made a vow to love until the day we died, became one flesh with and promised to love and cherish?