Women Who Left Their Kitchens 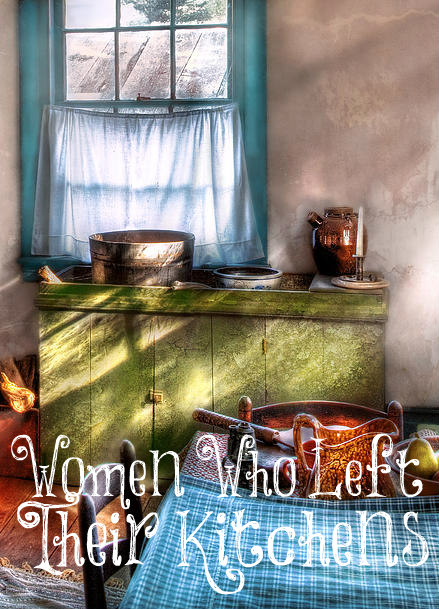 The feminists are all fired up with John Kasichs’ comment; "I didn't have anybody for me. We just got an army of people, and many women who left their kitchens to go out and to go door to door to put up yard signs for me." Oh, this is just terrible. "He thinks women are in the kitchen!" One women told him she would vote for him but she wouldn’t come out of the kitchen, so there.

Do you all see how preposterous this is, women? The exact place that God calls women to be, in the home, is now offensive to many women. Few women are in the kitchen anymore. Few even know how to cook. Even fewer know how to cook nourishing food. Many will say they don’t like to cook, so they don’t. They feed their family microwaved food and fast food junk instead, as the children become overweight, out-of-shape, and lonely.

Even the pundits were saying how retro this comment was of Kasich; it even made headline news. This is another example how far women have come and now even disdain their God ordained role. Women, being in the kitchen is a GREAT thing! It means you are in it and at home. It means you are fixing food for your families. It means you care about the health and welfare of your children and husband. It’s right where you are supposed to be! There is nothing more important for you to be doing daily as a woman than nourishing your family's bodies besides teaching your children the Word of God.

I remember watching an interview with a famous man and woman who both worked full-time. The man at one time during the interview blurted out, "I would love to come home from a long day at work and have a home-cooked meal ready for me and my clothes cleaned." Feminists probably mocked him for even saying this. "He's a big boy. He should get his own food and clean his own clothes." No, if you are a godly woman, you were created to be your husband's help meet in all of these areas. You are the one created to fix him food and clean his clothes.

Find out the food he wants to eat and prepare it for him. The majority of men alive today would LOVE a wife who fixed them delicious food. All children would love to have a mother who did this willingly for them. Unfortunately for feminist, men haven't been able to accept the feminist's life hook, line and sinker because God created men to need a help meet, even in a feminist culture. This hasn't changed for them one bit.

Men and children have been cheated. They've been cheated of having a wife and mother who loves them enough to be in the kitchen often preparing good food for them. Nourishing their bodies is important in many ways since they all eat at least three times a day. Don't take this job lightly, women, or listen to the lies of our culture. You belong "barefoot and pregnant" in the kitchen! This is all I ever wanted in life and if you are a younger, godly woman, you should as well. While you are in the kitchen, do it heartily as to the Lord. Be thankful for all the food the Lord has blessed you with, the kitchen to be able to fix food in, and for a husband that provides you the money to buy and fix food. Then on voting day, happily leave your kitchen to go vote for Rubio or Cruz who clearly proclaim Jesus Christ as their Lord and Savior.

She is like the merchants' ships; she bringeth her food from afar. She riseth also while it is yet night, and giveth meat to her household, and a portion to her maidens.
Proverbs 31:14, 15
photo source