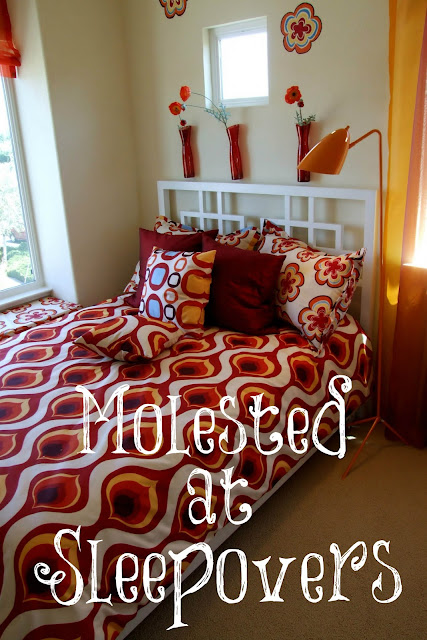 Rachel Campos-Duffy writes parenting blogs. She wrote an article answering women about  allowing sleepovers and she was shocked how many women commented who said it was at sleepovers that they were molested. Her husband is a DA and she said he deals with this issue a lot as well.*

"My husband is the District Attorney in our county. Needless to say, he is privy to the incidence of child sexual assault in our community. We know all to well that bad things happen, sometimes even in presumably 'good homes.' His access to this kind of information has made us a lot more protective (perhaps even paranoid)."

We rarely allowed our children sleepovers. I will never forget Ruth Graham Bell saying that she wanted all her children under her own roof at night. I agreed with her. With the proliferation of pornography at the click of a mouse along with so many children owning their own smartphones, even in Christian homes, we must be very proactive in protecting our children.

I went to sleepovers when I was young. I remember doing seances, playing with a Ouija board, playing spin the bottle, eating tons of junk food - nothing that was productive or healthy. Thankfully, I was never molested but I could see how it could easily happen if there were older brothers in the home, step-fathers, uncles, etc.

So protect your children, mothers. You are the one responsible for them and you want them to be as safe from harm and evil as possible. Many men can point back to a time when they were young and saw pornography at someone else's home which eventually led to an addiction. Often, this haunts them for the rest of their lives and prevents them from ever having a sexually satisfying marriage. This is why we are warned to "flee youthful lusts "(2 Timothy 2:22).

Teach your children to yell and tell. Make sure they know that NO one should ever touch their privates and then do everything in your power to protect their innocence.

Concerning time alone with your husband, which women have brought up when they found out that their children shouldn't go to sleepovers, make sure your children are in bed by 7:30 or 8:00 every night and the next couple of hours have as your time alone with your husband to cuddle, eat popcorn, give massages, read, watch TV, share, lots of lovemaking, or whatever else you love to do!

Train up a child in the way he should go;
even when he is old he will not depart from it.
Proverbs 22:6

*This post was written in 2013 and the article I referred to by Rachel has since been taken down.