Women Silenced In The Church 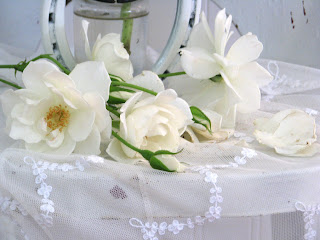 Are women allowed to speak in the church?  Here are a few Bible verses on that very topic ~

Let the woman learn in silence with all subjection.
I Timothy 2:11

Women should remain silent in the churches. They are not allowed to speak, but must be in submission, as the Law says. If they want to inquire about something, they should ask their own husbands at home; for it is disgraceful for a woman to speak in the church.
I Corinthians 14:35

I have heard several women argue against these verses by using the
account after Christ's resurrection when He told the women to
“Do not be afraid. Go and tell my brothers to go to Galilee; there they will see me.”  {Matthew 28:10}  So they think that it must be alright for women to speak and be leaders in the church if Jesus told them to proclaim His resurrection to the disciples.

For one thing, there was no church when Jesus told the women this.  It started later, after He was ascended into heaven.  God had Paul teach the people how church meetings were to be conducted.    There must have been some chaos in the churches.

There were divisions.  "I am of Apollos."  "I am of Paul."  "I am of Christ."  {I Corinthians 1:12} Paul quickly taught them that there should be no divisions and we worship one Lord.  Then he told them they needed to select elders, specifically men, so there would be leaders in the church.  These men had to be above reproach and walk blamelessly as an example to others.
{I Timothy 3}

The women must have been talking too much in the church which women are prone to do.  Have you ever been in a Bible Study with men and women and noticed the women usually dominated the conversation?  We definitely like to talk more than most men, therefore, Paul commanded the women not to speak in the church.

I am not sure how far he wanted us to take this command.  I know he doesn't want women in leadership positions over men in the church and teaching them.  He is very clear about that.  I don't think he meant for women not to sing or teach children or other women.  He just wanted to silence a woman's inclination to speak out and speak her mind which would lead to chaos in the church.

This never means that God values women less than men.  God is a God of beauty and order and this brings order to the church and gives men honor.  It offends me in no way and I don't think it should offend most women who love walking in obedience to God.