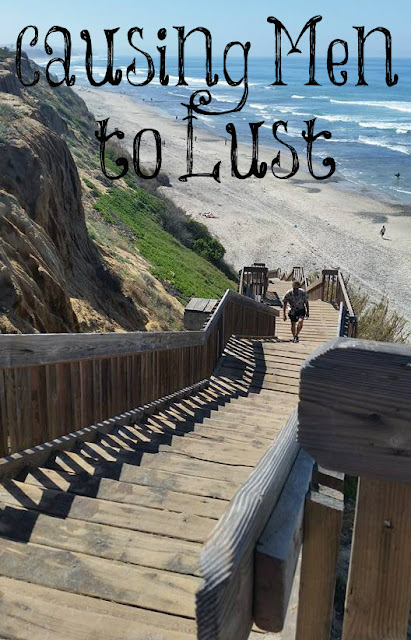 Every Saturday, Ken and I walk along the beach and then eat at our favorite breakfast place with my parents. Then we walk back and Ken runs and walks up and down these stairs five or more times. He loves the exercise and we enjoy this special time together. It's my parent's highlight of the week.

Recently, we took our grandchildren with us and while he was going up and down the stairs, our grandchildren and I played in the sand near the bottom of the stairs. After only a short while, Ken came over to me and told me we had to leave because the view had changed. He told me I would know what he meant in a minute. We packed up to go and I turned around. At the bottom of the stairs, a young woman was laying on her towel on her stomach with a thong on so her entire bottom was showing. Many men come down these stairs every day since it is a surfer beach and surfers like to surf there. They all saw a naked women while coming down the stairs this day. Earlier on the walk when we had to cross a bridge, I glanced down at the sand beneath and about six young women were laying on their stomachs with their heads together in a circle and their entire bottoms were showing.

We have been walking this beach for years and I don't remember seeing a woman in a thong there before. I am thinking that it won't be long before they go topless and we won't be able to go to the beach on warm days anymore. Do these women know that they aren't only causing teenagers and young men to lust but older men and even grandfathers to lust too? Turning men on is an ego thing for them. They feel pride when they know men look at them.  However, the boys and men aren't looking at them with love or respect, but with lust. They are looking at them as objects to satisfy their lusts, not as a human beings.

These women have no discretion. They are naked and unashamed when they are only supposed to do this with their husbands. They are defiling their marriage bed and have caused many men to stumble. They are only thinking about themselves and are mean, as Beth Moore has said, since they enjoy turning other women's husbands on. The Bible says they are like pig with a gold ring in its nose. Therefore, the Lord doesn't think too highly of their behavior.

"The desire to be desired in women is part of God's design for women's sexuality, but it has to be channeled in the right direction. A woman is supposed to be desired by her husband, to make him want her, and to revel in his appreciation of her body. But it is not right or appropriate for a woman to desire or get this kind of attention from men who are not her husband." {Lindsay Harold}

We, as Christian women, must do much better and teach our daughters to be modest. We must teach them about a man's sexual drive and that they are visual in nature. We want a man to respect us for our inward beauty of a meek and quiet spirit, not for the amount of flesh we show. Our clothing should never cause a man to stumble since we respect our brothers in Christ too much to do this to them. Never be responsible for causing someone else to stumble into sin. These women will be held just as accountable for their actions as the men who stumble. Yes, men are commanded to flee sexual immorality and this is why Ken informed us that we were fleeing. It's too bad that this young women didn't know she was taking the fun away from our grandchildren by making us leave playing in the sand due to her lack of discretion.

As a jewel of gold in a swine's snout,
so is a fair woman which is without discretion.
Proverbs 11:22