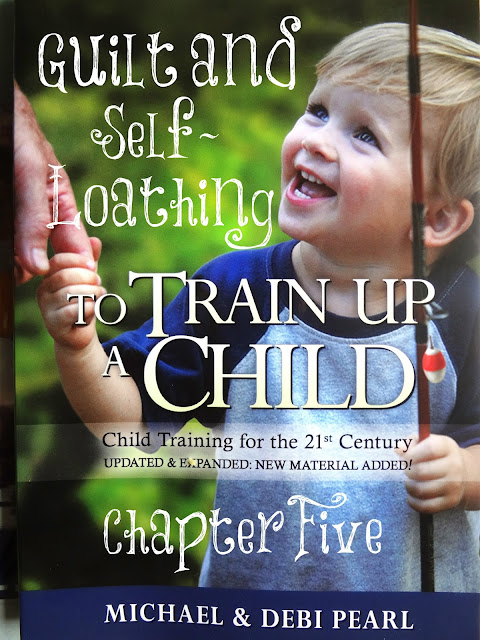 Most of you have heard of the many children who are into cutting themselves today or intentionally trying to harm themselves. Do you understand what this stems from? I wish all of you would read this entire chapter about guilt and self-loathing. I will try to summarize this chapter for you but it will be difficult because Michael Pearl teaches it in such a clear and concise way.

When my children openly disobeyed us, they were fearful since they knew they were "going to get it." Afterwards however, all they wanted from us was to be comforted and loved. We would talk about what they had done wrong and our purpose for spanking them. Then we would tell them how much we loved them. This restored our relationship. For parents who refuse to spank their children when their child does wrong, their child is often left with guilt that builds up inside of them.

Everyone has a built in conscience of knowing right from wrong. Fairly quickly in a child's life, they know when they have done wrong and if they are not properly disciplined for it, they will have guilt since it is the soul knowing itself and not liking what it sees.* Guilt will continue to grow knowing they have done wrong and eventually it will turn into self-loathing where they will want to hurt themselves as punishment in order to relieve themselves from the guilt. Child development specialists see the self-loathing and try to address that issue, but they do not have the tools to address guilt, the underlying cause.*

No child can be led from a pit of self-condemnation by heaping empty praise on him...Unresolved guilt lowers self-esteem to the point where one does not expect to do other than fail.* This is when the self-cutting and even breaking their bones begins. They are so disgusted with themselves and their guilt runs so deep, that they hurt themselves in hopes of ridding themselves of the guilt.

I have known grown women do this to themselves. They didn't have parents who loved them enough to discipline them properly and in love. The guilt-burdened soul cries out for the lashes and nails of justice.* Does any parent believe this is better for a child than spankings properly administered? Do they really want their children to grow up and suffer in this way? They must see the end result of their foolishness in not obeying God in the way He commands we discipline our children for their long term good. I grieve for the women who are so guilt ridden that they try to hurt themselves and in the process, they hurt their families and many times end up destroying them.

If we allow self-indulgence and unruliness to thrive in the child, it will produce emotional instability. An undisciplined child will be insecure. Lack of self-control issues forth anger. A failure to get one's way causes self-pity. Unfulfilled lust generates restless agitation. Feelings of being treated unfairly incubate bitterness.* We all know people who struggle with these issues. Most undoubtedly, they were raised by parents who didn't love them enough to discipline them and help them get rid of their guilt and teach them self-control. Their methods for raising them only made their guilt deeper and more harmful. God has provided parents with the position and the tools to purge children of their guilt and prevent self-loathing from taking hold*

This is where the rod comes in. God's Word tells us "withhold not correction from the child: for if thou beatest him with the rod, he shall not die. Thou shalt beateth him with the rod, and shalt deliver his soul from hell" {Proverbs 23:13, 14}. The properly administered spanking is restorative as nothing else can be...You theologians should understand that we are not suggesting that a parent's chastisement in any way redeems the souls of the child. But purging the emotions of guilt is a wonderful tool that enables the matured child to understand the atonement of Christ.* When a child is properly trained to know good and evil and sense the relief, after a spanking and being loved, of being relieved of guilt, when they grow up, they will more than likely desire the complete cleansing the Lord offers to all those who believe in Him and His finished work on the cross. Let us draw near with a true heart in full assurance of faith, having our hearts sprinkled from an evil conscience, and our bodies washed with pure water {Hebrews 10:22}. God would not have commanded parents to use the rod if it did not work something good in the child!*

What about "time-outs?" Do they work the same thing in children? No. Time-outs tend to produce feelings of rejection...An empty room and a pouting child incubate guilt and anger. Only the rod and reproof bring correction...Time-outs provide fertile ground for the incubation of guilt and self-loathing in the heart of the child.*

You can understand why many unbelievers hate the thought of spankings today. {Although, most of them have used them in training children since the beginning of time.} They don't understand the great need for parents to make sure their children understand that disobedience and rebellion will not be tolerated in a Christian home. If children are rebelling against their parents, they most likely will rebel against the Creator of the universe.

Our hope as parents should be to train our children to walk after the Spirit and not after the flesh. Therefore, God has given us the responsibility of dealing swiftly with our children when we see them walking in the flesh and turn them towards clinging to what is good.