Choose Life! A Walk in the Spirit 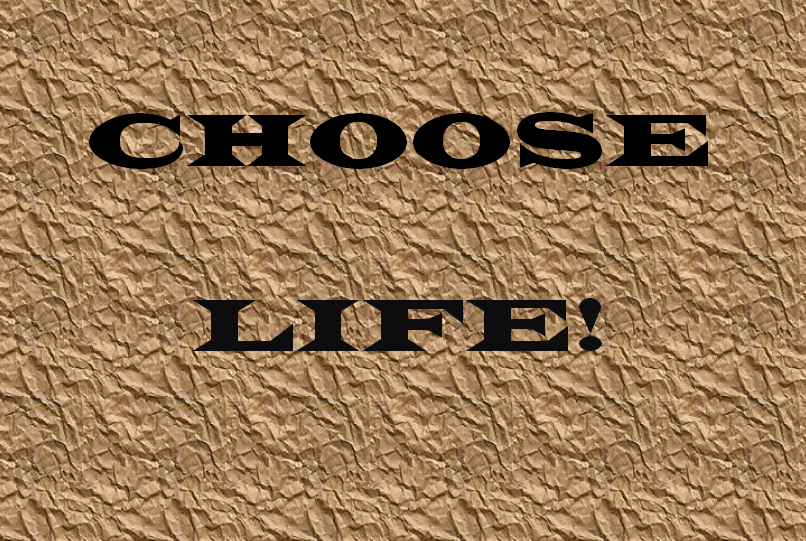 Really Lord? You are telling me to believe something that goes completely against what I can see, touch, feel, and experience. My flesh sure seems like it is alive and kicking, yet you want me to believe that "I died with Christ" that my "body of sin might be destroyed" and I am now alive in Christ Jesus as a New Creature who can walk in the Spirit and say "NO" to sin?

God said to the children of Israel, "I call heaven and earth to record this day against you, that I have set before you life and death, blessing and cursing: therefore choose life, that both you and your seed may live." {Deuteronomy 30:1} Fast forward 2000 years later and find that same Promise coming true in Jesus as the “Word, became flesh and dwelt among us.” The Promise that was given to Adam, was refined through Abraham, now was coming to fruition in Christ Jesus. The fact that the seed of Abraham would produce a Messiah that would deliver mankind from sin was a remarkable proposition. It was a simple spoken Word, a Promise of God, now fulfilled when God Himself becomes a man and dies with thieves on a cross.

What does it mean that “the Word became flesh,” except that God Himself cannot be separated from His Word as they are one and the same. Christ is the image of the invisible God, the firstborn of all creation. For by Him all things were created, both in the heavens and on earth, visible and invisible, whether thrones or dominions or rulers or authorities—all things have been created through Him and for Him. He is before all things, and in Him all things hold together {Colossians 1:16,17}.  Christ and the Word of God are inseparable, as Christ is the Word in the flesh, the Promise who became a man.

All believers know that the cross on which Christ suffered was intended for each and every one of us, yet what God promises is that anyone who looks upon the cross of Christ and believes in Him shall be saved. Through a promise from God, we are spared eternal damnation as Christ took on the penalty and pain, not only for my sins, but the sins of the whole world; That whosoever believes in Him shall not perish but have eternal life {John 3:16}.  The promise that God made, has been kept, and all men who call upon the name of Jesus and who believe that God raised Him from the dead are saved {Romans 10:19}.

The children of Israel who wandered the desert would have understood the cross and its promised salvation quite clearly. Not only had they sprinkled the blood of the lamb on the wooden doorposts, in the manner of a cross, they also found salvation in the desert from the stings of the vipers by looking at a brazen snake held high on a post. The illustrations from history are remarkably clear that salvation comes from a promise of God, to those who by faith believe His promises. Such faith always results in actions and bears fruit in the lives of those who believe.

The outstanding Bible teacher, Michael Pearl in his Romans series, tells the story of the research scientist who raised snakes in the California desert and milked their venom for sale to the manufacturers of antivenom. His wife called him one afternoon and frantically told him to get to the local hospital as his seven year old son had been bitten by one of his most deadly snakes. He rushed to the hospital only to be greeted by the doctor who said that there was nothing he could do to save the little boy. No anti-venom could arrive in less than 2-3 hours, even by plane, and by that time his son would be dead.

The doctor tried to comfort him by saying, “God needs you to be here to be strong for your family and to provide for them.”

“No, No… you don’t understand. I have been bitten by so many deadly snakes that the venom cannot kill me.  I might have terrible pain but I cannot die because of a snake bite.”

Within minutes the doctor had the father’s blood typed, and as it was a match, he was placed in a bed beside his son and the blood from his veins was coursing through his dying son’s body. The son lived because the father had been stung countless times before and he was willing to share his immune rich blood with his dying son who was saved.

The promised One, the Word of God, the hope of all Israel and the whole world, hung on a cross and received all of the stings of sin Satan could give Him. He took it all. Now He simply asks us to look upon Him, to place our faith in Him and at that moment His blood will instantly be coursing through our veins. The sure antidote for sin is the blood of one who has been stung with sin a myriad of times, yet could not be kept in a grave.  Is it not a wonderful irony that the serpent of old, the snake himself, would now provide us with the perfect antidote? That just as the venom of the snake can kill, it also will bring life to those who are bitten if they take the anti-venom, purified through the blood of a lamb.  {Yes, the preferred animal used to make antivenom is now a lamb}.

Sin will kill life, kill relationships, and destroys our bodies unless we tap into the antidote of a new Spirit that only Christ can give by dwelling within is. Every believer has Jesus, the blood of the true Lamb of God and His life flowing in us. And that very life will flow through us to others, each and every moment we believe in God’s promises.

One might have expected history to be kinder to the children of Israel as the receivers of the promise, yet it is replete with one sad story after another of unbelief, and a falling away from what they knew to be true. Had not God kept his promise to deliver Israel through Moses?  Had he not brought them to a land of promise overflowing with milk and honey? Yet, as the seasons changed and time marched on, one generation after another fell into unbelief. The history of God’s mighty work and His Promise was quickly discounted for trusting what one could see, touch, feel and experience.

Perhaps the children of Israel are excused far more than the Christian can be for their unbelief, for they did not partake of the Spirit of Christ the way that we are given it today. Their resource to keep God’s commands was limited, yet we have within us the unlimited power of God's Spirit, the very life of Jesus within us, to walk in obedience, and in newness of life, so that the righteousness of the law might be fulfilled in us, who walk not after the flesh, but after the Spirit {Romans 8:4}.

It is so easy to believe the material world instead of the promises of God. There is nothing new in Joshua’s cry to “choose you this day whom you will serve” whether the gods which your fathers served, or the Lord God of Israel. The choice to serve God or serve some other god, especially the god of our own fleshly desires, remains to be chosen each and every moment of our lives. We choose God when we believe Him.

Most of us as believers stumble into the same pattern as the children of Israel, and we forget that we were purged from our sins {2 Peter 1:9}. Our blindness quickly overtakes the reality of the Promise. Mankind is so conditioned by the world, and the influences of the world to trust only what we can experience. Our “reality” becomes what can be proven with hypothesis and repetition in order to be believed. This is the lie of Satan, yes, the serpent of old, who went to Eve and then Adam and said, “Don’t trust God; trust what you can touch and see; trust your inward desires; trust me instead.”

For the Christian, when we believe in the Promise of God, we instantly receive the eternal life in Christ Jesus and are guaranteed no damnation for our sins: past, present or future.  The antidote is complete in Christ {Colossians 2:10}.  The promise of God to Abraham now becomes a multitude of promises made by God to His Son, and all those who are in Christ Jesus. Those who taste eternal life by entering into the death, burial and resurrection of Christ, become inextricably fused into His body. Our old lives are dead and we are raised with Christ, and made alive again, that we might walk in newness of life {Romans 6:4}.

It seems that from one end of the Word of God to the other there is a battle raging between what man can see vs. what God calls the reality of His Promise. I believe God wants it this way.  He wants a world where everything around us looks so real. A delicious apple glowing from the one tree we are not to eat from with our desires and our feelings so strong. Yet deep in the soul of all men God has placed a whisper that says, “Will you trust me?”  “Will you believe me?” “Will you walk by faith and not by sight” “Will you walk in the Spirit and not in the flesh?” "For when you do you prove your love for your Creator."

Will you choose this day life or death? Will you believe God that you are not in the flesh, but in the Spirit, if so be that Spirit of God dwells in you? {Romans 8:9} Will you approach the Christian life not as a huge effort to be a better person, or sin less, but instead to simply believe and trust in each and every one of God’s promises?  For when we believe God is when we find true life, abundant and free. Christ breathes His Spirit into our souls each and every moment we trust in His promises. Choose Life!

For He rescued us from the domain of darkness, and transferred us to the kingdom of His beloved Son, in whom we have redemption, the forgiveness of sins {Colossians 1:13}, and you are not of this world {John 18:36}.