Does God Approve Of Polygamy? 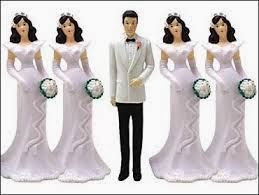 Some people apparently think that God approves of polygamy.  One Christian couple tried to persuade Ken and me on one of my posts that polygamy is a good thing.  Yes, it did happen in the Old Testament but it produced very ugly fruit.  Those wives led their husbands, specifically King David and King Solomon, away from the Lord.  You know the ending of the story between Abraham, Sarah, and Hagar, even though Hagar was only a concubine and not a wife.

In the New Covenant, which we live under since Christ died and rose again, there is no word of polygamy or multiple wives in the New Testament.  In fact,  all the verses addressed to husbands refer to his "wife" {singular} and the qualifications for any type of leader in the church state that he must be a husband of ONE wife.

With so much false teaching going around and many Christians being biblically illiterate, we must know Truth and where God stands on important issues such as marriage.  He ordained marriage to be between one man and one woman forever and always.  This was His design from the beginning and it has never changed nor will change with the changing seasons.

Nevertheless, to avoid fornication, let every man have his own wife,
and let every woman have her own husband.
I Corinthians 7:2

A bishop then must be blameless the husband of one wife...
I Timothy 3:2

Therefore shall a man leave his father and his mother
and shall cleave unto his wife: and they shall be one flesh.
Genesis 2:24