Phil Robertson ~ Head Of His Household 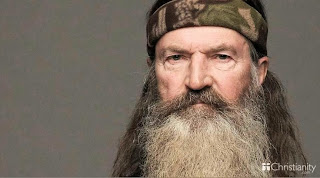 Phil Robertson met his grandson's girlfriend.  His grandson was going to take her on a date.  Phil told them to go fishing and then he went with them.  While they were fishing, he told them to not have sex.  It leads to gonorrhea, syphilis, etc.  He told them they should not touch each other anywhere but the neck and above until they signed on the dotted line.  He said a peck on the cheek is just fine. He told his grandson to always treat her with respect.  Then encouraged him by saying, "Find yourself a good girl who will cook you fried squirrel and walks around with a Bible in her hands."

At dinner that night when the whole family was gathered together, they bowed their heads in prayer and he prayed that his grandson and girlfriend would stay pure during their dating years.

Phil Robertson is the head of his household.  He speaks Truth to his children and grandchildren whenever he has a chance.  He warns them of the dangers ahead and tries to steer them on the narrow path.  He is not afraid of embarrassing them if it means protecting them from future harm.

We saw many parents afraid of their children.  They were afraid to tell them to not see naughty movies.  They were afraid to speak to them much about sex and its consequences outside of marriage.  They thought if they were too strict with them, they would rebel.  And they would never dream about praying for their sexual purity in front of the whole family.

I admire Phil Robertson for not being afraid of doing any of those things.  Children and teenagers need guidance, especially being given by their fathers, the heads of the household.  They need continual reminders of what is right and what is wrong in this filthy society.  They need strong, protective boundaries. If you are not continually teaching and reminding them and even praying about it, they are going to be easily sucked into the cesspool around them.