Are You Married To A Judas Or A Peter? 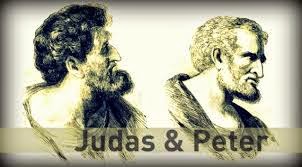 This topic was one of the first topics I wrote about when I began this blog. I think it needs to be revisited since there are some women out there that believe that the advice I give could lead to the murder of women!

I  have been mentoring women now for over ten years. When I get a particularly tough relationship and the wife is thinking of getting out, I always ask her if she is married to a Judas or a Peter. Is he an evil man like Judas who betrayed Jesus or a man that does bad things like Peter who denied Jesus three times? Every single one has admitted their husband was a Peter. I have never had one woman tell me she was married to a Judas.

Therefore, I give them advice based upon God's Word and what I have seen work in many marriages. If a woman is married to a Judas, a truly evil man who has the ability to kill her, I would tell her to go elsewhere for counsel after I told her to call the authorities and have him locked away.

The majority of women I mentor have husbands that have addictions such as pornography, are going through difficult times in their lives or having an affair. Not one of them has ever felt physically threatened by their husbands so I have felt confident in giving them advice.

I teach them what God has to say, regardless of their situation. I know a woman personally who was married to a very difficult man for many, many years. On his deathbed, he came to know Jesus and will spend eternity in heaven because of his faithful wife.

Too many people out there, mostly unbelievers, want to discredit what I teach because of the 2% or so of women who are married to evil men. I am not suppose to teach God's Word for fear some husband will kill his wife because of my counsel?

No one is responsible for making a wife stay with her husband except herself. She has the freedom to accept counsel from someone or not. She can leave her husband and even divorce him if she wants. It is like trying to blame the Pearls for the death of several children because their book was found in the parent's home. The only blame can be put on those parents.

I know some women are fragile and don't feel like they are strong enough to leave their husbands. So someone is suppose to go to their home and physically pull them out? No one knows truly what goes on behind closed doors. When I mentor women, I am only getting one side of the story. I never hear the man's side so I simply have to give advice according to what the wife is telling me. There have been a few women who really feel like they can not handle living with their husbands anymore. I will counsel them to seek help from an older, godly women, godly family members, or go to the elders of the church. She may even need to separate for a time for her own health and sanity.

Every marriage is different. Every situation is different. Every person is ultimately responsible for their actions and the advice they choose to receive. The Bible says that women married to disobedient husbands may win their husbands without a word. It tells us to overcome evil with good. It tells us to love our husbands and "let no man put asunder what God has joined together." God hates divorce. He tells us wives are to be submissive and obedient to their own husbands. I will continue to teach these things and each woman must decide for herself if she wants to listen and do it or not.

For after this manner in the old time the holy women also, who trusted in God, adorned themselves, being in subjection unto their own husbands: Even as Sarah obeyed Abraham, calling him lord: whose daughters ye are, as long as ye do well, and are not afraid with any amazement.
I Peter 3:5,6