A Marriage Of Blood, Sweat, And Tears 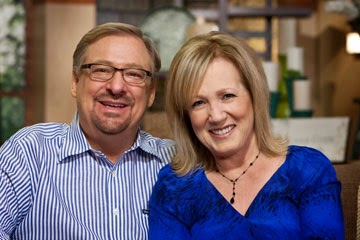 Rick and Kay Warren were interviewed recently. They said their 40-year marriage has survived through blood, sweat, and tears. One of the women who was interviewing them then asked, "Why would anyone want to get married if they hear that marriage is so difficult?"

Kay said she had no feelings for Rick when she married him. Even when she was walking down the isle, she was hoping someone would stop her. She admitted they hardly knew each other and are completely opposite. He is an extrovert and she is an introvert. He is a dreamer and she is a pragmatist, etc. In every way, they both agreed they are different.

Their marriage has been very difficult because of this. Rick said, "Mastercard saved my marriage. We were making $800 a month {years ago}, and my counseling bill was $100 a week and I racked up $1500 on a bill, and I should say Marriage Priceless," said Warren, while joking about advertising for the credit card company. {source}

What I am going to say next is my own opinion. Neither of them seemed to have any glaring sin in their lives, just differences. They both appear to be godly, wonderful people and I admire their dedication to each other and to marriage but I think they could have saved a ton of money and spared many years of misery if Kay had an older woman who taught her to love and obey her husband.

Every couple has many differences; every single one. We are all unique with different gifts, talents, and personalities. We also have our own set of struggles and faults. In order to have good marriages from the beginning, we must be taught to love and accept our husband just the way that he is and allow the Lord to change him. It is learning to please and respect him that makes for a happy marriage.

Christians shouldn't be telling the world that the only reason we stuck out our marriage is through blood, sweat, and tears. Ken and I did it that way the first 23 years of our marriage until I was mentored by an older woman, Debi Pearl. It only cost me the price of a book. Now, marriage is relatively easy. We enjoy each other and rarely have disagreements. We discuss things but I have learned how not to allow those disagreements to turn into arguments.

I have learned to accept Ken just as he is instead of trying to change him. What the Christian community needs are older women willing to stand up and take younger women under their arms and teach them self-control in being a wife and mother. Then, most Christian couples could tell the world how wonderful marriage is and how much they love being married. This is the message we should be sending out.

May your fountain be blessed,
and may you rejoice in the wife of your youth.
A loving doe, a graceful deer--
may her breasts satisfy you always,
may you ever be captivated by her love.
Proverbs 5:18,19