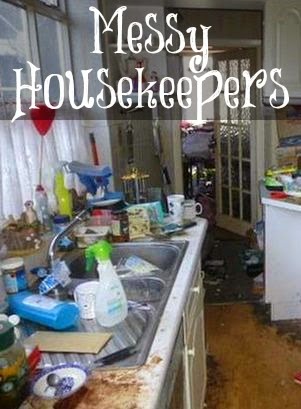 When I was growing up, my mom had a very dear friend who she was very close to.  She was a terrible housekeeper, however.  When I would babysit, I would clean the kitchen for her and it would take hours.  Everything was a mess.  It would be a terrible place to live in.

When my children were growing up, we had a neighbor who was the same way.  I sent a young woman who was helping me when I had four small children and Ken was traveling half the year to clean her house one time.  She said it was terrible.  She found dog poop on the floor, it was infested with fleas, and smelled badly.  My children detested the days that she was the driver for the carpool.  Her car smelled like vomit and it was trashed.

One of the reasons for being a keeper at home is to take care of the home, to keep it neat and tidy.  It is important to train your children help you keep it this way.  I realize that it is MUCH more difficult when you have small children and it is almost impossible to keep the house orderly but simply do what you can with the energy you have.  Get rid of clutter.  We don't need nearly as many things as we have.  Your children don't need many toys. God is a God of order and discipline and we must strive to be this way also.

However, spending time raising godly children is much more important than a perfectly spotless home.  These are from the words of Marilee Horton, "I had another friend who kept the messiest house in town, rarely got a meal together on time, ironed what clothes the children needed right before the school bus came.  While maintaining better control than that is important to me it wasn't to her.  Every day when the kids go home she sat and leisurely listened to their chatter.  With four children this could take hours,  all the 'time-killing' made me nervous but in the long run I learned a valuable lesson from her.  The art of communication takes time and when the children feel they are worth it, the atmosphere is set at secure."

I still think a mother should do everything she can to keep her home as neat and tidy as possible by not wasting time watching television and playing on the computer!

But all things should be done decently and in order.
I Corinthians 14:40