We NEED Men In Emergency Situations! 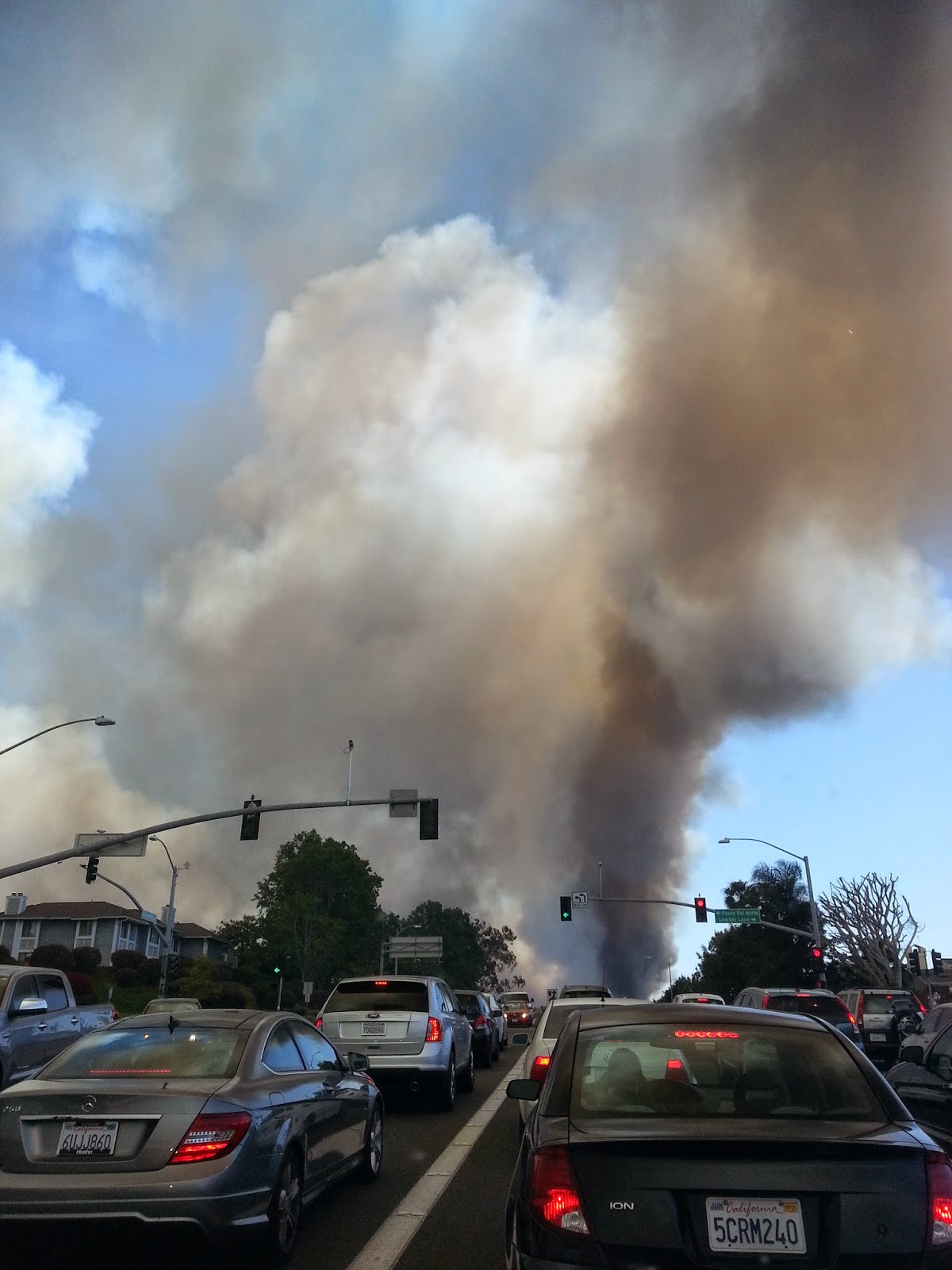 Living in Southern California, I am all too familiar with Santa Ana winds, 95 degree weather, zero humidity and firestorms. On Wednesday, Ken and Ryan had a golf tournament 30 minutes north of here. I was home alone working on the computer. All of a sudden, the sun disappeared...never a good sign with Santa Ana winds since there is never a cloud in the sky.

I opened my front door and a huge cloud of smoke looked to be a block away. I ran inside and called 911. It was busy. I ran across the street to my neighbors and alerted them of the fire. I found out it was about a mile east but that is nothing when the winds are wiping the fire right in line with your home. I had no idea what to do.

My son, Steven, from Texas, told me to call Jon, my son-in-law, and have him come over to be with me in case I needed to evacuate. He showed up shortly afterwards and told me to pack up right away. We needed to get out soon. {The picture above is the one he took as he was coming to get me.}

What to pack? I was paralyzed. I had no idea. Jon told me to get passports, birth certificates, etc. so I did. I went up into my room and grabbed a bit of my lotions, makeup, toothbrush, socks, and clothes. Ken wanted me to take his laptop. I-5 was closed due to fire and bad accidents so he couldn't even come home if he wanted to.

Yrena, a good neighbor friend of mine, called while I was trying to pack. She was frantic over her dog, crying and full of fear. Jon calmly said he would run down to him and get him. We would take care of him for her. Today she called and said that when she heard of the fires and she was 20 minutes from home, her son Eric called her and encouraged her to calm down and call us.

Ken and Ryan finally made it to our house. Then it took Ryan over an hour to get to his home {only fifteen minutes away} because of all the road closures. Erin was all packed up and ready to evacuate with smoke billowing in the distant. Knowing Erin, I am sure she was extremely happy and relieved when Ryan, her rock, showed up.

Yrena told me how happy she is that there are men in our lives to help us in times of emergency situations. For some reason, we both lost our ability to think clearly so our sons and my son-in-law thought for us! I am very thankful for the men in my life. Whenever I have been in an emergency situation with my health or the children or whatever, the person I want by my side is Ken because he always knows just what to do.

Men overall are more rational than women especially in emergency situations. God made them that way and I, for one, am very happy that He did. {Now if we can only stop having hot, windy, and dry days...}

Be watchful, stand firm in the faith,
act like men, be strong.
I Corinthians 16:13