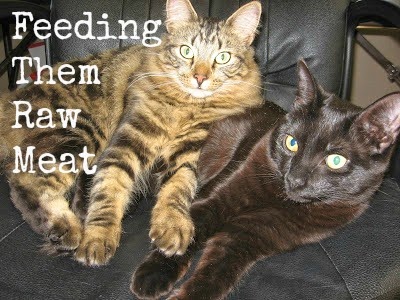 Let me just start this post by saying I am not a veterinarian. They would probably completely disagree with what I am about to tell you. Mine did.

Meeting with one of the young women I mentor, she told me she had to miss work because her cat had an asthma attack. What? I have heard that house pets are getting all the diseases that humans are getting because they are eating cooked, processed, dead food just like most humans are eating.

What do animals in the wild eat? Cats and dogs would eat fresh, raw meat that they had just killed. So I reason that they must be meant to eat raw meat. Whenever I get organic, whole chickens from Costco, I feed the cats the gizzards, liver and kidney from inside of the chicken. They love it! I have heard it not only keeps them healthier, but keeps their teeth clean. {Don't they look healthy; nice shiny fur!}

I also buy dry cat food that is free from having any grains in it. Animals were not meant to eat grains.  They mostly eat this but have some raw meat when I have it. I don't want them to die from diabetes, asthma, heart disease, or cancer if I can help it. I know. I'm strange but it makes sense that they are healthiest if they eat the way God intended them to eat just as we are much healthier if we eat food as close to the way God intended for us to eat it.

Let me just warn you about something. If you decide to start giving them some raw meat, do it in small quantities at first.  They may have diarrhea and pass gas until their digestive system gets used to it. My cats had those problems at first but now they never do. {We even called one of them "stink bug" for awhile!} Good luck! :)

Whoever is righteous has regard for the life of his beast,
but the mercy of the wicked is cruel.
Proverbs 12:10