Are Your Thoughts Accusing or Excusing One Another? 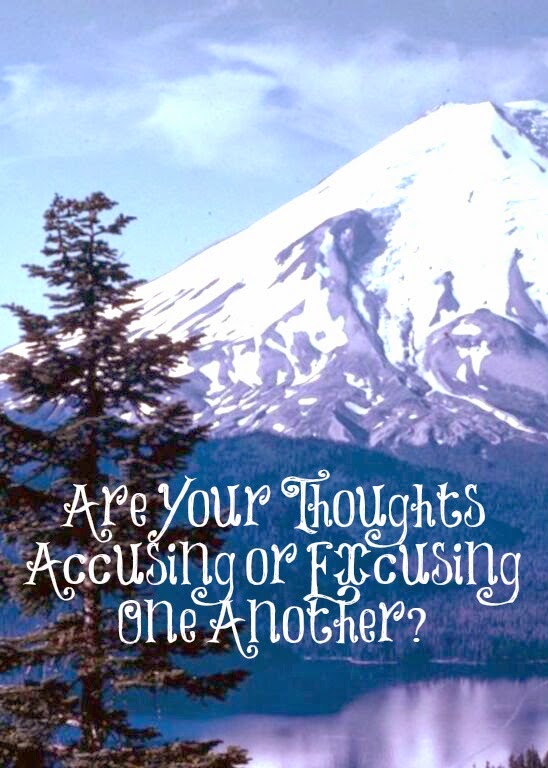 Most people's conscience is pretty dead today, it seems, even in the church. We are all born with a God-given conscience which our thoughts flow from. We instinctively know most things that are right from wrong. "Because that which may be known of God is manifest IN them; for God hath showed it unto them...so they are without excuse" {Romans 1:19, 20}. As we grow up, many begin to stop listening to their conscience and doing what their flesh wants. Lust is their motive to give up truth. "Wherefore God also gave them up to uncleanness through the lusts of their own hearts..."{Romans 2:24}. The more they practice the muscle of not listening to their conscience, they finally come to a place where "God gave them over to a reprobate mind..." {Romans 1:28}.

Our conscience is NOT infallible. It depends upon what you feed it with. If you feed it with the filth of the world, your conscience will be very weak. If you go to most psychologists, they will even deaden your conscience further by telling you that you should not have ANY shame or guilt in your life. They will try to build up your self-esteem by feasting on the lies of the enemy. "No, your feelings, thoughts and emotions are not wrong. Go with them. Explore them and allow them to define you. Listen to your heart!"

On the other hand, if you feed your conscience on the Word of God, you will have a highly tuned conscience and godly thoughts will flow out. "But solid food is for the mature, who because of practice have their senses trained to discern good and evil" { Hebrews 5:14}. When you get anywhere close to sin, bells and whistles will go off so loudly warning you of danger, so you will flee immediately. You will be too uncomfortable to be anywhere near sin.

Many in the churches have seared consciences. They have been immersed in the world way too much and their consciences no longer give them bells and whistles. They have shut them down by continually telling them to go away and excusing their thoughts. Instead of listening to the still small voice, they ignore it and reason within themselves that what they are doing is fine and dandy.

Therefore, "Whatever you do in word or deed, do all in the name of the Lord Jesus, giving thanks through Him to God the Father" {Colossians 3:17}. If you spend a lot of time feeding on God's Word, listen very carefully for those bells and whistles and FLEE. Don't have any part of sin; "let it not be once named among you, as becometh saints" {Ephesians 5:3}.

Which shew the work of the law written in their hearts, their conscience also bearing witness, and their thoughts the mean while accusing or else excusing one another.
Romans 2:15