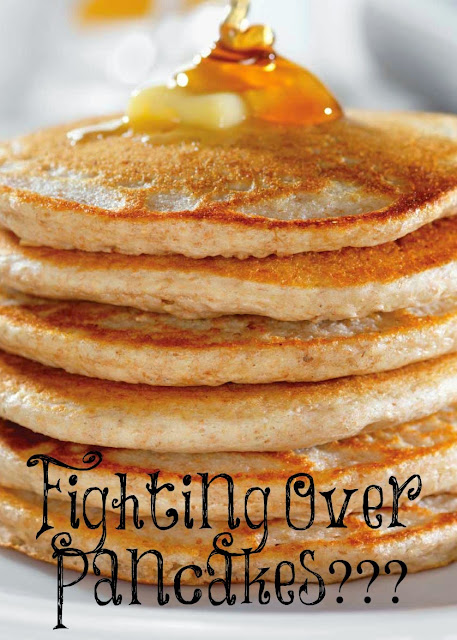 "All couples are going to fight but it's the way you fight in determining if you're going to be successful in moving forward of not...Most of us are not equipped to fight fair," Pastor Craig Groeschel stated on Focus on the Family. He shared that his first big argument after being married was over pancakes. They both wanted them cooked a different way. The argument went on and on. However, did he mention the fact that God commands wives to be submissive to their husbands. NO! This argument would have never happened if his wife had been mentored by an older woman to love and obey her husband; even please him and defer to his wishes! She would have GLADLY made pancakes just the way he wanted them and there would have been NO argument. This is such an easy and simple solution! No, couples should NOT fight. There is not one verse in the Bible agreeing with his statement about learning to "fight fair." Couples, instead, need to be taught to NOT fight, wives to be submissive to their husbands and husband to be godly leaders of their homes.

Pastor Groeschel believes marriages are to make us holy and not happy. My mother-in-law gave me the advice that I was suppose to make Ken happy, NOT holy. In fact, the more I tried to make Ken holy, the more unhappy he became and the more I have tried to make him happy, the more holy he has become! I wasn't to be his Holy Spirit but instead called to live a godly and chaste life that would draw him closer to me; not nag and try to control him which pushed him farther away. I wish I had known what making him happy and submission looked like when we first got married!

The Pastor did have many great things to say. He was rebellious when he was young until the Lord got a hold of his life. He urged parents to teach purity to their children at a young age. Don't do married things before you are married! NO compromise before marriage. He admits that there needs to be boundaries and safeguards in marriages to prevent destruction. He has programs on his iPhone, iPad, and computer to be held accountable. {Accountable2You is a very good and inexpensive program.} He can't download apps now because of the programs but this is a very small price to pay to eliminate temptation and walk in holiness. He believes marriages need to be very open with their spouses about their struggles and hold each other accountable which we heartily agree with! He also warned us that many of the things we see on TV are "poison." Amen!

The host asked why the church looks like the world? I believe the reason is that we are entertained by what the world is entertained by. We aren't in the Word daily and renewing our mind with God's Truth. We shouldn't be teaching couples how to fight fairly but to not fight at all and allow husbands to be the leaders of the home. We should dress modestly outwards and inwardly with a meek and quiet spirit. If Christians would rise up and walk in holiness by God's grace, the world would see that being a Christian is a whole lot better than living without Jesus.

Let NOTHING be done through strife or vainglory;
but in lowliness of mind let each esteem other better than themselves.
Philippians 2:3

***Emphasis mine! If you don't believe in biblical submission, then hopefully, you will believe and live out this verse towards your precious husband.