Finding Yourself "Out There" 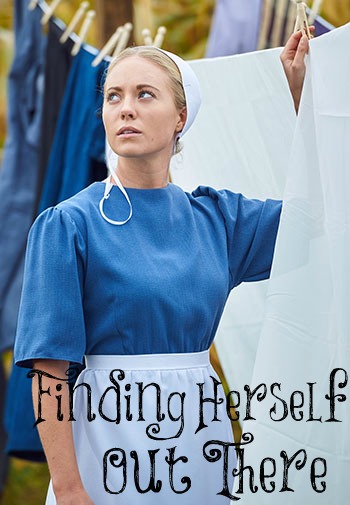 Many women believe that when they grow up, they need to go "out there" to find themselves.  Something "out there" will bring them the satisfaction and fulfillment they are longing for. Forget being a wife and mother for awhile and pursue higher education, a career and travel before "settling down." This is the premise of the movie Love Finds You in Charm. If you LOVE decent and wholesome movies with a biblical message, I encourage you to watch it, even with your children.

Emma is an Amish young woman and doesn't feel like she is one of them; she's different in her mind. The outside world fascinates her and she desires to explore it and to become a part of it. She finally gets a taste of it and realizes that her "out there" wasn't all that great so she went "home" as she said, to the decent, hard-working man who was in love with her. They marry, settle down in a home together and begin having children. They are both so happy and content!

He maketh the barren woman to keep house,
and to be a joyful mother of children. Praise ye the LORD.
Psalm 113:9

According to this verse and others in the Bible, we should be rejoicing when we are able to be keepers at home and blessed with children, not trying to put it off for as long as possible to "enjoy life." God's will for women is to be help meets to their husband, keepers at home, and full-time mothers to their children. Unfortunately, many women realize this too late after they have a career and a mountain of debt they must pay off. They feel like they have been lied to by our society and even the church.

Many women who love the Lord and His ways, when they hear this message, feel like it is a breath of fresh air. However, I am not trying to make working mothers feel badly. I am only teaching what God commands I teach and trying to plant seeds into them that maybe they can one day come home also. I'm not judging them; I'm encouraging them since their husbands, children and home need them at home full-time, since it's a full-time job if you are married and have children. No one will love, nurture and raise your babies like you. No one, not even Grandma.

True fulfillment and satisfaction is only found in the Lord and His ways. It is NEVER found in the world and its ways. The world only delivers disappointment, dissatisfaction and empty promises. Pursue the Lord. Spend time at His feet finding out His will for you in His Word, not in what the world tells you. You'll never find it there. Jesus, His Spirit living mightily within you and His Word are all you will ever need for guidance.

***In honor of Elizabeth Elliot, who has just passed away, I wanted to share her views about this subject since I learned so much from reading her books. I heard her speak in chapel once while I attended Westmont College many years ago and she's the only speaker out of hundreds that I heard who I remember; even what she spoke about!

"Do the women's liberationists want to be liberated from being women? No, they would say, they want to be liberated from society's stereotypes of what women are supposed to be...Some very interesting facts have been uncovered by scientists which feminists will have to treat very gingerly for they show that it is not merely society which determines how the sexes will behave... The idea of matriarchy is mythical, I've learned, for not one that can be documented has ever existed. Doesn't it seem strange that male dominance has been universal if it's purely social conditioning? One would expect to see at least a few examples of societies where women rather than men held the positions of highest status...Isn't it really much easier to believe that the feelings of men and women throughout history bear a direct relationship to some innate prerequisite?...It was God who made us different, and He did it on purpose. Recent scientific research is illuminating, and as has happened before, corroborates ancient truth which mankind has always recognized. God created male and female, the male to call forth, to lead, initiate and rule, and the female to respond, follow, adapt, and submit." {Elizabeth Elliot, Let Me Be a Woman}