Should Women Breastfeed in Public? 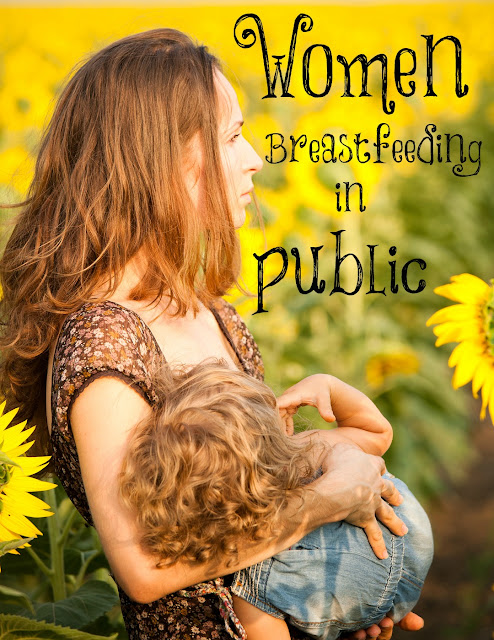 God commands older women to teach young women to be chaste and discreet. He also commands that women be modest. We are to cover our bodies and keep them covered except for our husbands. Men like breasts. They like to look at them and feel them. It matters not if they are having sex with their wives, seeing them on television or watching a woman whose breast is exposed while she is nursing. Men are visual by nature. Why do you think pornography brings in billions every single year and it is mostly men who struggle with it?

For some reason, young women today believe that if they are nursing their baby in public and they expose their breast, it's okay. It's not okay. It's not being chaste, discreet and modest. We had this discussion in the chat room and I was shocked that some young women didn't understand this so this is the reason God commands older women to teach young women these things. If young women aren't being taught to be modest, discreet and chaste by older women, they aren't going to hear it anywhere else. I am hear to tell you that men don't distinguish a bare breast that is nursing a baby to breasts he may see in a magazine.

Exposing your breasts to men who are not your husband is immodest. I realize this is not the message being given by the media but it's a message being given by God. It matters not how other women in other countries breastfeed their babies openly and how it is becoming more and more acceptable in our society. Christians are called to a much higher standard than the world around us and we are called to walk the narrow road of obedience to the Lord as an example to this "faithless and perverse generation" {Matthew 17:17}.

The majority of the women in the chat room believed it was fine to breastfeed in public as long as a woman is discreet and not showing her breasts which I agree with. Some babies don't like to be covered but there are still ways to be covered. However, one of the women made this comment that was profound and I was happy to see got many 'likes', "Sometimes obedience is a cross. I've now nursed six children and have had some that didn't mind covers and some that absolutely hated them. The issue here is not about our 'rights," but what is right. Didn't Paul say if eating meat causes his brother to stumble that he should never eat meat again? There are times in life that practicing love will mean a cross for us. It means I may have to move to an area where my baby can eat without a cover. I may miss a show, conversation, a meal, etc. but I am honoring God with my body and considering others before myself."

Young women, I am commanded by the God of the universe to teach you to be discreet while breastfeeding. We should not learn any of our ways from the society we live in but by God's Word and His will for us. He created men and knows how they are built. He commands women be chaste, discreet and modest for a reason; to protect our brothers in Christ and not to put stumbling blocks into their path. It is also a way to honor the Lord with our bodies and saving them only for our husbands. The most important reason for being discreet according to this verse in Titus is so women will not blaspheme the Word of God.

Older women teach the young women....To be discreet, chaste,
keepers at home, good, obedient to their own husbands,
that the word of God be not blasphemed.
Titus 2:3-5