Bikinis and Careers Have Destroyed America 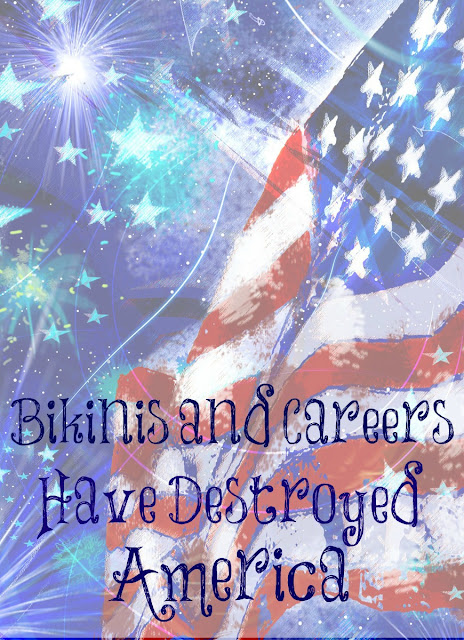 Yes, I wrote the title correctly; bikinis and women having careers are what is destroying America according to President John Adams* on June 2, 1778, not homosexuality, gay marriage, sexual immorality, nor pornography.

"From all that I have read of history and government of human life and matters, I have drawn this conclusion, that the manners of women were the most infallible barometer to ascertain the degree of morality and virtue in a nation. All that I have since read and all the observations I have made in different nations have confirmed me in this opinion.

"The manners of women are the surest criterion by which to determine whether a Republican Government is practicable in a nation or not. The Jews, the Greeks, the Romans, the Swiss, the Dutch, all lost their public spirit, their Republican principles and habits and their Republican forms of government when they lost the modesty and domestic virtues of their women."

Women have absolutely lost all forms of modesty, even Christian women. They feel comfortable in bikinis, parading their bodies around for all to see. They have no problem showing off their breasts with low-cut tops and showing off most of their legs with short, short skirts. God commands women to be modest. He clothed Adam and Eve in coats after they covered themselves with fig leaves.

In Ezekiel 16, God says to Jerusalem, "...your breasts were formed and your hair had grown. Yet you were naked and bare. Then I passed by you and saw you, and behold, you were at the time for love; so I spread my skirt over you and covered your nakedness...I also clothed you with embroidered cloth...I wrapped you with fine linen and covered you with silk....But you trusted in your beauty and played the harlot...And you took off some of your clothes...Because your lewdness was poured out and your nakedness uncovered...I shall gather them against you from every direction and expose your nakedness."

Nakedness and shame always go together in the Bible. We are to be modest, discreet, and chaste women of God, not looking as the world looks or dressing as they do. We are to be examples of Christ to the world. The world, which is governed by Satan, should never be our example for anything.

Women have abandoned their domestic virtues, as I have written over and over again. They fled their domestic duties to pursue higher educations and careers, learning the feminist agenda along the way which began with Eve when she decided she wanted to do things her way instead of God's.

Women abandoned their children to daycare and government run schools where their children are bullied and taught things contrary to the Word of God. They have failed to raise their children in the nurture and the admonition of the Lord; speaking to them when they rise up, walk along the way, and sit around the dinner table, since they are too exhausted from submitting to and obeying another man at their jobs who is not their husband.

What does God call us to do? Love and obey our husband, be chaste, and discreet keepers at home. We can't think we can abandon God's Word and find joy-filled lives or a healthy society when we act contrary to His Word. So many repercussions have happened since women have left their homes, I can't even begin to name them, but if you research my "keepers at home" category, you will find most of them. It is tragic, but it is mostly tragic since even Christian women, along with many of their husbands, have fallen for the feminists' lies.

PLEASE, women, dress modestly. Let the words 'discreet' and 'chaste' define ALL of your clothing. Go home and raise your children and be a true help meet to your husband. If you are an older women, teach the young women  to be sober, to love their husbands, to love their children, to be discreet, chaste, keepers at home, good, obedient to their own husbands, that the word of God be not blasphemed {Titus 2:3-5}. Thank you.

In like manner also,
that women adorn themselves in modest apparel,
with shamefacedness and sobriety.
1 Timothy 2:9

***Here is an important article for any parents who have children in the public school system. "There are two reasons for this step (taking your children out of government run schools), given this Extreme Court decision. If your children remain in the government schools, there is now no legal way for them to be taught any normal view of human sexuality. And, depend upon it, they will be taught the other kinds. And second, they will be taught an approach to civics that sees nothing wrong with the Supreme Court’s juridical putsch here, and that is just as worrisome."