How to Train Your Husband? 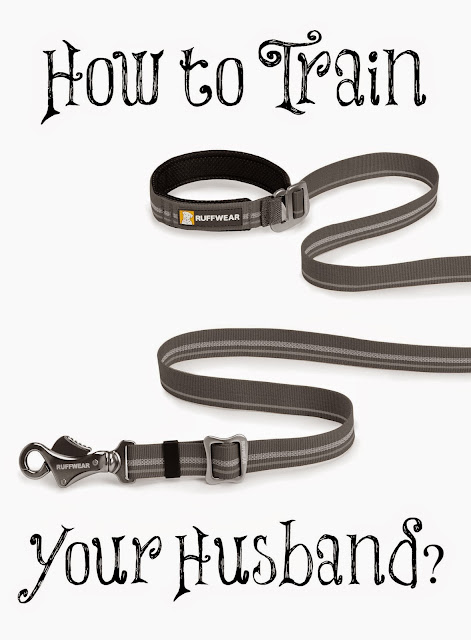 Training your husband isn’t any different than training a dog according to Dr. Wendy Walsh, a clinical psychologist. She recommends tackling one problem at a time. Ignore the bad behavior you don’t want to grow and reward the behavior you want to grow.

First, communicate clearly what behavior you want changed. Tell him once and then never say it again because if you do, your nagging will become a positive reward; he’s getting your attention. {I can't believe any husband would say that nagging is a positive reward!} Figure out his positive reward system; what does he like? Catch him being good. As soon as he does something you want him to do, go and reward him right away. It could be a kiss, a hug or “thank you so much”; positive, emotional stroking.

If he doesn’t know he’s doing something, awareness has to happen first. Then when he’s aware, see if he’ll be agreeable to have you kindly remind him whenever he does it.

Your husband can’t know about this method because if he knows about it, he’ll know it’s a game. You do it without ever letting them know. You let them know clearly the behavior you want them to change and then you catch them being good and reward it. This is how the pleasure principle works. They naturally begin to do things that get positive rewards. This also works for training a wife by a husband or a child. We always want a reward.  Any organism will go for that reward.

So what do you think of Dr. Walsh's method of training your husband? Dr. Walsh was speaking to women who wanted their husbands to take care of their laundry, clean up after themselves after eating and cleaning the kitchen, and other habits that these wives don't like. None of them were sin issues; just things that annoy the wives.

I definitely agree with the Dr. about clearly explaining in a kind manner what you'd like your husband to do or not do and then not speaking about it again; not nagging, complaining or manipulating. I also agree about giving our husbands a lot of "strokes," but what I disagreed with is the fact that these women were expecting their husbands to take care of their laundry and clean up the kitchen after working all day while the wives were home. Of course, this is NEVER mentioned. Instead, tools are given for the wives to use in order to get what they want their husbands to do. They aren't bad tools but it would have been great to encourage the wives to not expect those things from their husbands since they were created to be their husband's help meets. Also, it isn't a wife's job to "train" her husband!

Can you see how wives working full-time is even more detrimental to marriages? Both spouses come home tired and wanting to relax. No one is in charge of the home and fixing food so arguments begin and there's no easy solution. Husbands were created to NEED a help meet. Women were created to be a man's help meet. If many wives refuse to be their husband's help meet, why would most men want to get married??? There's no benefit for them. Do you see why so many men aren't interested in marriage anymore?

And the Lord God said, It is not good that the man should be alone;
I will make him an help meet for him.
Genesis 2:18