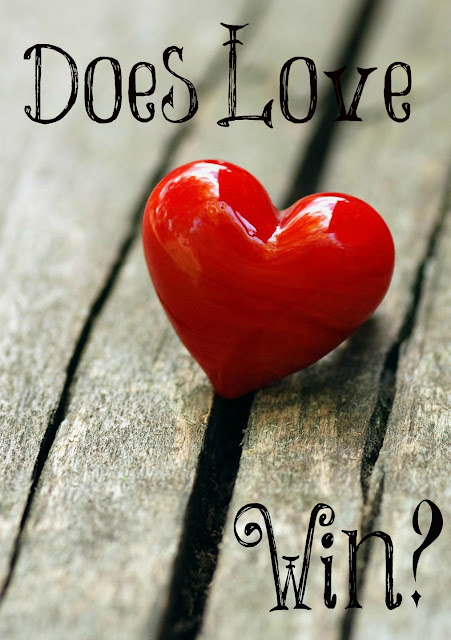 Did love win now that men can marry men and women can marry women? Does love give us the green light to do what we want even if it is opposed to God's original purpose and design? I noticed most of the Christian women's blogs didn't write anything about the gay marriage decision. Does love mean we don't write or say anything that offends others in hopes that it will bring them to believe in Jesus? Is love only about the idea that all we need to do is love people to Jesus? Yes, love covers over a multitude of sins and we are called to be people of love, but what exactly does love mean?

Most people think of love as simply accepting people the way they are, doing things for them and being kind. Is this all? Rob Bell wrote a book called "Love Wins." Many blogs only teach about love and grace, as well as many preachers and teachers. They don't want to offend anybody, be liked by everybody and not make others uncomfortable. Is this love? Does this win others to Christ?

If you want to know what love is look at Jesus, since He is the definition of love. Did everyone who knew Him as He walked this earth believe in Him? No! Many rejected the personification of love even though they saw the way that He lived and many even listened to Him and touched Him. When He rules this earth for 1,000 years, many will reject Him. This proves that love isn't what wins, since Jesus is love.

What is love exactly anyways? How does Jesus define it since He is love? Yes, He loved people deeply but He didn't want them to stay the way there were. When people were caught in sin, He would tell them to go and sin no more. He rebuked the religious people for their many sins against others and their pride. He angrily cleaned out the temple since they were using the temple for ungodly means. He served people by even washing their feet. He never had boundaries with people. Yes, He went to the mountain to pray but He didn't ever prevent people from interrupting Him. He exhorted people to obey His commands and told them that if they truly loved Him, they would obey Him. He hated sin so much that He allowed Himself, the Creator of the universe, to be crucified on a cross so we could be freed from sin. This is what true love looks like. It isn't just grace and mercy. It speaks the Truth in love also, even though many people won't like us since we expose their wicked deeds. If just "love" could win others, Jesus would have won all.

We are called to live lives as Jesus did. We are to encourage people to go and sin no more. We are called to exhort and rebuke those who are in sin. We can have righteous anger at sin and the destruction it causes. Love serves others, even doing menial jobs like cleaning the toilets for our families. It welcomes others to interrupt us if they need our help. Love encourages others to obey all of God's commands, even the difficult ones. We are much more concerned about pleasing our Father than people, so we do the work the Father has assigned for us to do even if it is completely contrary to what the world is doing. Finally, we are willing to deny ourselves, even to the point of death, to proclaim the Good News of the Gospel; all of it, including being filled with His Holy Spirit to accomplish His will once people call upon His name and are saved.

This, my friends, is love. And no, love does not win, neither does mercy or grace. Only those who believe in Jesus and His shed blood for their sin wins. Believe on the Lord Jesus, and you will be saved {Acts 16:31}. It's not an easy road we are asked to walk. Just writing, teaching, and preaching about love, mercy and grace is easy. Teaching ALL what true love entails isn't easy, but we are commanded to do it in hopes they will believe since it is the ONLY thing that saves people from their sin and eternal damnation.

Preach the word; be instant in season, out of season;
reprove, rebuke, exhort with all longsuffering and doctrine.
2 Timothy 4:2