Abortion is Rooted in the Constitution? 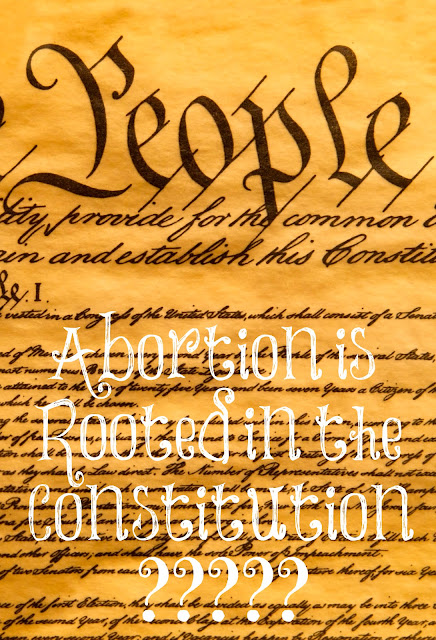 "'Women have told me they’re afraid to bring children into this world.' When we believe this, we believe a lie from Satan. Salvation always comes through a baby: baby Moses, Baby Samuel {all the prophets really} and of course Baby Jesus. God told us to multiply and be fruitful and if we are honest with ourselves, a lot of the current political state of our country could have been completely avoided if Christians actually heeded God's Word instead of the world's lies. If the past generation hadn't been all about birth control the Christians would have outnumbered everyone else. If our generation stops trying to live the 'American Dream' and starts procreating, in one generation we could turn America back around. But this fantasy world that we erroneously believe, where we can all have 2.5 children, live in the suburbs while sending them to great public schools, isn't real. It will land us exactly where we are now; in a world that denies the power of God." {Michelle}

God tells us to have children and that children are a gift and a blessing. However, Hillary believes that the Constitution grants the right for mothers to slaughter their babies in the womb. She believes Planned Parenthood does a lot of good since it gives the right of women to kill their babies if they aren’t planned or unwanted. One young woman I mentor worked with a woman who was married and pregnant. She decided after several months that it wasn’t time to have a baby yet. She wanted to wait six more months to have a baby so because of our “rights in the constitution” she went and had her baby murdered in her womb. We were all praying she would have a change of heart, but she didn’t and our country allows this and even supports it.

“Well, again, let me put this in context, because it’s an important question,” Clinton said. “Right now the Supreme Court is considering a decision that would shut down a lot of the options for women in Texas, and there have been other legislatures that have taken similar steps to try to restrict a woman’s right to obtain an abortion. Under Roe v. Wade, which is rooted in the Constitution, women have this right to make this highly personal decision with their family in accordance with their faith, with their doctor. It’s not much of a right if it is totally limited and constrained. So I think we have to continue to stand up for a woman’s right to make these decisions, and to defend Planned Parenthood, which does an enormous amount of good work across our country.”

Baier seemed to want a more definitive statement. “Just to be clear, there’s no — without any exceptions?” he said.

“No,” Clinton said. “I have been on record in favor of a late pregnancy regulation that would have exceptions for the life and health of the mother. I object to the recent effort in Congress to pass a law saying after 20 weeks, you know, no such exceptions, because although these are rare, Bret, they sometimes arise in the most complex, difficult medical situation.” {There are so few reasons to terminate a pregnancy and murder the baby for the life of the mother. This is just an excuse. Plus, the way way she has voted, even voting for partial birth and late term abortions, proves she doesn't want any limitations put on abortion.}

Mrs. Clinton is one day going to have to stand before the Great White Throne judgment seat of God and give a reason for her actions. God will be her final judge, but we certainly judge her reasoning as evil.

The best way to counter this evil, women, is to have as many children as the Lord blesses you with. Let everyone know that you love having and raising children. Let them know that they are a gift and a blessing from God. Raise them to know and love the Lord with all of their heart, mind and soul. We overcome evil with good and having children is very good!

For You formed my inward parts;
You wove me in my mother's womb.
Psalm 139:13

***I thought the Constitution gave everyone the right to life, liberty and the pursuit of happiness. What about right to life does Hillary not understand?