How Can You Help Someone Whose Home is Filthy? 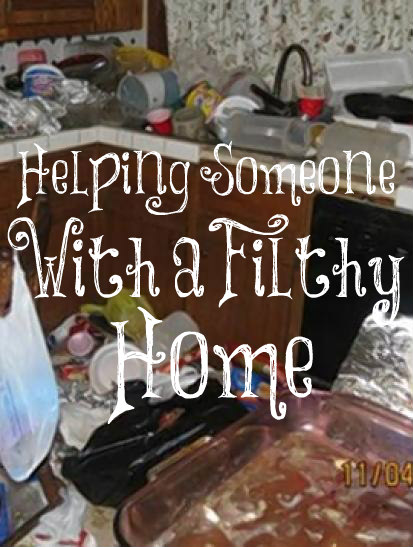 A woman had a question on thejoyfilledwife’s very popular post Raised in a Filthy Home to Becoming a Neat Freak. “I have a question as the friend of a Christian wife and mom of three {ages 5-10}. The four of us - our husbands, included - are close friends. We adore their family! However, their home is absolutely messy and chaotic, to the point that when we spend time at their house, my husband and I are very uncomfortable. I know they have some awareness of it. Both of our husbands are pastors. I want to encourage her, and be honest with them, but not judge her. What would you recommend I do or say?” Several woman have asked me this question also, so I asked thejoyfilledwife to respond with her thoughts. Here is what she wrote back to me.

These kinds of questions are always so hard because it depends on the relationship and if she's said something, even subtly, before. People rarely mention it when they've already made several comments and then wonder why the other person is defensive. :-)

We have an older couple we are friends with whose house smells so horrible that we don't allow ourselves or our children to visit inside. Instead, we invite them out to lunch at their favorite spot and do our visiting there. The air quality in the home is horrible and they are very aware, for their children won't allow their grandchildren to visit their home {there's also other drama} and they refuse to do anything about it. They sit on their couch all day and their home is incredibly filthy. They don't think it is and are content with it.

These kinds of subjects have to be approached very sensitively because there can be a lot of hidden reasons behind the mess. Sometimes it's laziness or never having been taught how to keep house. Other times, they are oblivious to it or are so busy with other things that it's permanently placed on the back burner. Most of the time, I think people don't really know where to start and they don't realize that the key to making housework easier is to maintain little by little, instead of creating a two week-long project for themselves that makes them feel like they're in over their head and too overwhelmed to even start.

I've never tried articulating this concept before, so hopefully I'm able to be clear, but my husband always tells me that I have mastered the art of "saying something without saying something" when it comes to dealing with big issues in others. In other words, since people are so overly sensitive nowadays, you almost have to find a roundabout way of communicating to them in a way where they almost think it's their idea. This allows them to save face and not feel embarrassed. If they are embarrassed, they will likely clam up and make things worse. You are trying to reach their heart.

Sometimes, I'll make a comment about myself and see if they voluntarily agree with me on it. For instance, I may ask someone what book made the biggest impact upon them this year or the most helpful tip they came across, being genuinely interested. I ask them questions and show an interest. Likely, they will ask me the same question in return, in which I will give them a "sandwich" answer: mentioning a few varied things, with the message I really want to get across being discreetly sandwiched somewhere in the lineup. Maybe it was a book on topic "XYZ" which changed my perspective on something. Then I'll say, but its probably also a tie with a tip I learned from a friend {or book, or web site} that helped me keep my home organized much more easily because, I'll admit, I was really struggling with just where to begin because it became this mental block for me and, honestly, I was a little embarrassed to have ever asked her about it.

Often, at this point, they will ask about it {because you've been honest about having been in over your head and they feel you will understand their situation and not judge them} and you can answer simply. Then you can ask them a favor and tell them that you are realizing that what you could really use is a friend to hold you accountable and encourage you in this endeavor, knowing how much peace it brings the family. Tell them that you trust them and wonder if they would be willing to let you check in with them on how you're doing. Often this is all it takes for people to open up to me about their situation and ask to participate also, because you've made yourself vulnerable first and the idea for them to participate on their end would be their idea.

If that doesn't work {it usually does} then I will share tips with them enthusiastically as I read about them and make a really big deal. For instance, "Oh my goodness, I just came across the most helpful way to do _____. I wish I would have known about it before because I could have saved myself a lot of time and headaches. You have several young children, so you will probably relate to this too, but have you ever come home to ____ and you think to yourself that there's just no way on earth you have the energy to deal with it right then? Well, this lady made a suggestion that we've been trying out and I can't believe how much easier its been for out family and how relaxing it is to come home to a house free of clutter like that."


You get the idea. You are, in a more straightforward way {for those who don't pick up on subtleties}, acknowledging that they probably are struggling with this same thing since they are in a similar phase of life as you, but you are making it all about what you are changing and what's working for you.

There are a few people that you can be refreshingly straightforward with about a topic of concern, but most women are way too easily offended to see the true love and concern behind a comment. Because of this, I think it beneficial to practice dealing with such topics in a way that comes across smoothly and indirect. It works for me almost 100% of the time and has allowed me to reach people instead of cause them to close off. Just a few ideas!

Wherefore comfort yourselves together,
and edify one another, even as also ye do.
1 Thessalonians 5:11