Yield Your Members to Righteousness ~ Romans 6:18-23 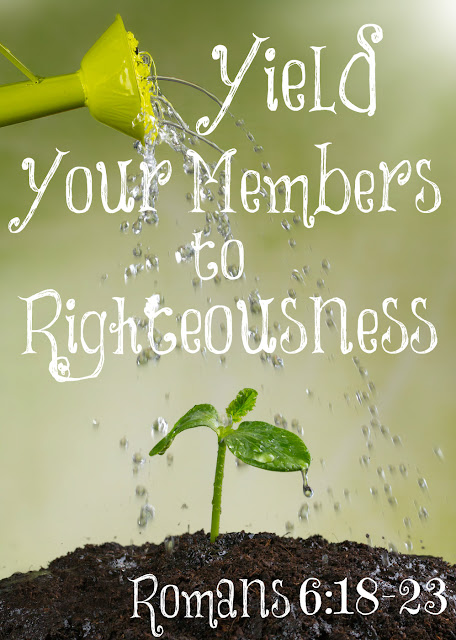 A huge misconception is that this teaching on Romans is sinless perfectionism. Since we are dead and freed from sin, we died with Christ, rose with Him, are new creatures in Christ and are called saints now does not mean we are perfect and never sin! No, it means we are freed from the power of sin, the consequences and damnation of sin, and the ability to chose to not sin. We will learn about this in the following verses from the great Apostle Paul.

Being then made free from sin, ye became the servants of righteousness {Romans 6:18}. Sin and the Law terminated at the moment of death with Christ. Life and freedom from sin began with the resurrection in Christ. Paul is not saying that the believer cannot do other than righteousness, any more than servants of sin means that one cannot do other than sin. {Just as when the slaves were freed, some chose not to be free.} This is not about ability or limitations, but about relationship and orientation. One who is free from sin can still sin if he so chooses. The human person is never beyond choosing. Paul will proceed to explain his point more fully in the next five verses. {I wrote a post about this called Stop Playing In or Near the Lake of Mud!}

What fruit had ye then in those things whereof ye are now ashamed? for the end of those things is death {Romans 6:20} Those who sustain a relationship to sin as its servants are under no obligation to walk righteously. If one is not in Christ, his efforts to do good are not welcomed. He is wasting his time. He is under no obligation to obey Christ. He is none of His. Christ can say, "I never knew you." The servants of sin are slaves to their own bodily passions. Until one repents toward God and is born again, he is outside of God's jurisdiction.

What fruit had ye then in those things whereof ye are now ashamed? for the end of those things is death {Romans 6:21} In the former relationship, what fruit did sin produce? Remembering the lousy fruit of the former relationship should cause the new creature to abandon sin altogether and throw himself into righteousness as readily as he formerly threw himself into sin. The root was sin, so the fruit was death.

But now being made free from sin, and become servants to God, ye have your fruit unto holiness, and the end everlasting life {Romans 6:22}. Christ made us free by placing us inside of Himself and His freedom. The fruit of the Holy Spirit is holiness. Everlasting life is the end of the life that Christ gives us.

For the wages of sin is death; but the gift of God is eternal life through Jesus Christ our Lord {Romans 6:23}. Yield your members to God as servants of righteousness, because the wages {the end} of sin is death, but this great gift of God is eternal life. Therefore, walk in compliance with who you are. You are a child of the Most High who calls you His child and a saint!