To Love Your Husband ~ Chapter Sixteen 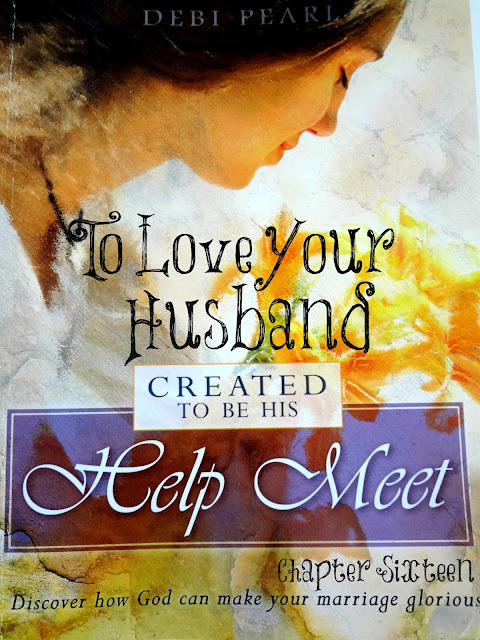 The first time I read this chapter about loving our husband, I thought it would be about submitting to him and obeying him but no, it was all about sex. Why is this considered loving our husbands? Why is sex so important to them? I will never forget giving the book Every Man's Battle to a friend of mine who had a son in high school, like my boys were at the time. I thought it would be good for her son to read. A few weeks later when I saw her, she said, "That book makes it seem that every man is a pervert!" She thought this since it clearly explained a man's great desire and need for frequent sex.

Debi gave a picture of a man who was very hungry and how he will scour the kitchen looking for food to satisfy his hunger. Sex is the same way for them. No matter how much I love  and respect her feelings and needs, I still have this overwhelming sexual need that drives me until it is satisfied...Married men need frequent sex just as much as they need food. "I want to crawl into bed at night with a woman who is glad I am her man, and I want to make love every few days so I don't have to think about the girls at work."* Yes, men are visual and this shouldn't offend you. This is the way God made them. It doesn't mean they shouldn't have self-control, but it is better for you to be the one continually satisfying this need so he won't be like a hungry man concerning sex. Don't keep him hungry.

Please read this chapter in Debi's book, women. I would type out the whole thing if I could type that long! I mentor women who hate sex, never give their husbands sex, don't move during sex, use any excuse to avoid it, etc. Did you know that all of these are sin? Did you know that when you do this you are blaspheming the Word of God since God commands that you love your husband and this it the highest form of love towards your husband? Women have all types of excuses. Hey, I'm way past menopause at 57 years old and I could have all types of excuses with all of my health problems, but I don't because I love Ken and want to please him in this area. I want him to be happy.

Many women hate to think that their husband has so little lack of self-control, but it is  God's Word that commands we don't refuse each other in this area so our husband won't be tempted or feel unloved by the woman who should love him the most {1 Corinthians 7: 3-5}. When a wife refuses her husband, her disinterest in him sexually is a reflection of her heart, and he knows it. Her husband knows in his spirit that all her excuses are just that: excuses for not wanting him. When a woman just allows, cooperates, and tolerates, it leaves a man feeling sick at heart.*

Man is driven to succeed. Hormones drive him to be the best at work, to drive aggressively, to build the best buildings {praise God for men!}, or write a musical piece. But his most pressing drive is to be a successful lover.* When a woman refuses to please her man in this area, she is disobeying God's clearly stated Word . The gravity of his wife's sin is staggering. She has NO FEAR of God Almighty. She has blasphemed the Word of God with her selfishness, thinking only of her own needs and not loving her husband. Never, never, never be guilty of such a grave sin.*

There be three things which are too wonderful for me, yea, four which I know not: The way of an eagle in the air; the way of a serpent upon a rock; the way of a ship in the midst of the sea; and the way of a man with a maid.
Proverbs 30:18, 19

*Quotes taken from the book.