Do Careers Give Meaning to Women? 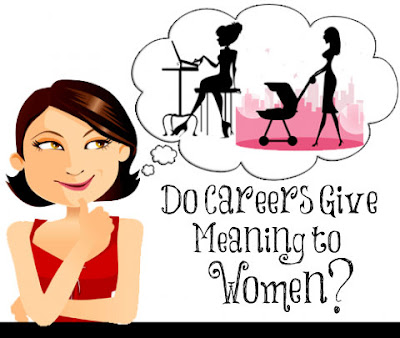 Women aren't like men and women aren't supposed to find meaning in their careers. They aren't built physically for what it takes to have careers for long periods of time. Studies had proven that women get careers that give them solid time off and they won't have to be on call. After a while, they get worn out from their career. Some get married while they have careers and get even more exhausted trying to run a career and a home.

Unfortunately, even Christian women have fallen for the lie of our culture. Instead of seeking careers, they should be preparing for marriage by getting an education that doesn't cost much and doesn't put them into debt. It also needs to be a career they can drop the moment they either get married or, for sure, when they have children. Teaching is a good career since they can use their credential to teach their own children, in case this is required.

Besides seeking a career, they should work on learning how to cook and keep a home clean and tidy. They should be mentored on how to be a godly wife and please their husband. Even learning what to look for in a potential husband is an extremely important thing to learn. I told my girls to marry men who loved the Lord deeply and worked hard. Neither of them wanted a career and both of them only wanted to get married and have children.

I will therefore that the younger women marry, bear children, guide the house, give none occasion to the adversary to speak reproachfully.
1 Timothy 5:14