Released From the Flesh; Married to Christ ~ Romans 7:1-4 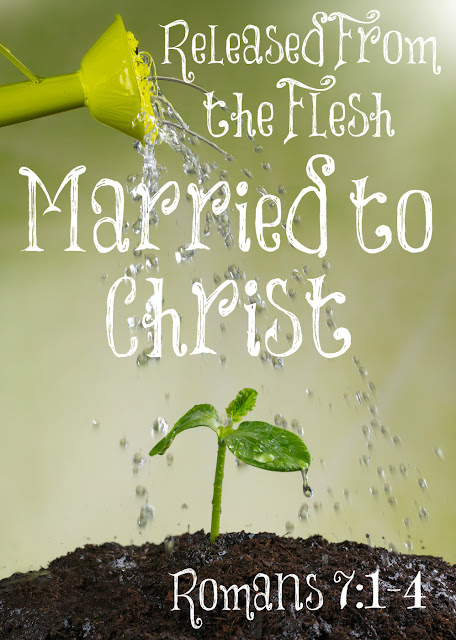 Now we come to a very misunderstood chapter in the Bible. Paul has clearly explained to us in Romans 6 that we are dead and freed from sin, plus we are now servants of righteousness. Christ lives mightily within us, we are new creatures in Christ and walk in newness of life. Why, all of a sudden, does he say in Romans 7 that nothing good dwells within him and he has no ability to do the right he knows to do. We learn what this means by taking Romans 7 in context of Romans 6 and 8. Before beginning, it's imperative to know that the Law didn't die. We died to the Law when we died with Christ, therefore, we are no longer under the Law.

Know ye not, brethren, {for I speak to them that know the law}, how that the law hath dominion over a man as long as he liveth? {Romans 7:1} Paul has not suddenly reverted to a discussion on marriage. He refers to the law of marriage because it provides a perfect analogy for what he wants to say. He wants to show us how we are no longer under the Law, yet still alive. The Law's jurisdiction over others is in practice as long as one is alive. {I know it's confusing but just stick with me!} As long as a man is alive, he is under the Law.

Wherefore, my brethren, ye also are become dead to the law by the body of Christ; that ye should be married to another, even to him who is raised from the dead, that we should bring forth fruit unto God {Romans 7:4} We, like the woman, have become dead to the Law since we died with Christ and to the Law. When we discover exactly what died at our co-crucifixion with Christ, we have discovered the identity of the husband. The flesh died with Christ so we could be married to Christ. This is why we are new creatures in Christ! When Christ died, exactly what part of His being died? His Adam flesh, since flesh and blood cannot inherit the kingdom of God. The purpose of the death of the old husband {flesh} was to release the woman {the believer} to be married to Christ. Now that we are free from the flesh, we can now walk after the Spirit and bring forth fruit unto God. But ye are not in the flesh, but in the Spirit, if so be that the Spirit of God dwells in you. Now if any man have not the Spirit of Christ, he is none of his {Romans 8:9}.

The next verses begin HERE. The series begins HERE.