Always There for Her Children 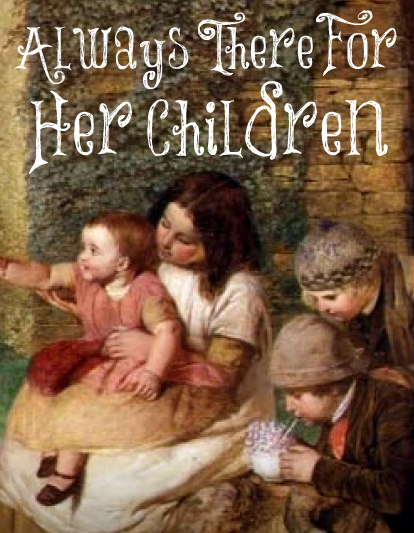 Elisabeth Elliot said this about her mother, "My mother was a godly woman. She was a woman of prayer. She stuck to her Bible. She read it everyday and she lived by the rules. She was a woman of self-discipline; always neat and feminine. She accepted her femininity as a gift from God. She believed in punctuality and I think of her as a woman of restraint. She never made a big fuss about anything. She was also submissive to her husband and honored him in the way she treated him. There was order in the home. Our father was the head. My mother taught us obedience and respect. She sang songs to us, she prayed with us and read us stories. She was always there for us."

Many women today are not godly women, even those who call themselves Christian. They rarely prayer nor read their Bible. They read worldly literature and they live by these rules. They are not self-disciplined; rarely neat or feminine. {They prefer sweats and t-shirts, instead.} They don’t accept femininity but desire to be like men and do everything men do. They aren’t punctual since they are too busy with the non-essentials like time on the Internet or phone. Besides, it doesn’t matter if they are late since everyone else is late too. In fact, it's very acceptable to be late to church. {Our church is almost empty when it begins on time.} They aren’t women of restraint and make a big fuss about many unimportant things. They are NOT submissive to their husbands since they excuse it by saying this always leads to bondage and abuse. They don’t honor their husbands, but spend their time arguing, belittling and trying to control their husbands. There is very little order in the home since there is no one leader in the home and if they are the leaders, there is disorder because it is not God’s order. They don’t teach their children obedience and respect since they would rather be their children’s friend instead of parent. They don’t have time to sing songs, pray or read stories to their children since they work full-time outside of the home. They are rarely home for their children.

Are you a godly woman or a worldly woman? Are you living in obedience to the Lord's commands to us or are you living in obedience to the enemy of your souls? Are you always there for your children as Elisabeth Elliot's mom was for her? This world is an insecure place. God provides a mother to a child to provide the security and direction the child needs. This is why it is imperative a mother be home full-time. If you have a career, your career will come before your children since it takes up so much of your time away from home. You can't be always there for your children. You are their guardian and watch over them by making sure they are safe, nourished and cared for. You must also be home full-time to keep a clean and tidy home. This takes a lot of time on top of fixing healthy food. Reading to them, singing to them and playing games is what you do with them in your free time instead of wasting your time with a computer or television. They will fondly remember times like this with you and treasure it deep within their hearts. You are investing your life in your children's lives and there is no better place to invest it in.

She looks well to the ways of her home
and eats not the bread of idleness.
Proverbs 31:27