To Train Up a Child ~ Chapter One 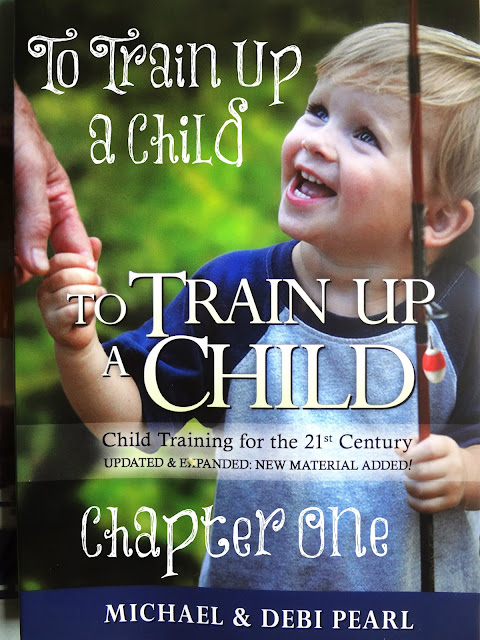 Do your children want to please you? I sure wanted to please my mom when I was growing up. She disciplined and trained me. I also knew I couldn't get away with misbehavior and I loved her. Likewise, our children wanted to please us when they were growing up. They feared disappointing us. It's healthy to "fear" parents when it's the fear of not wanting to disappoint them by misbehaving, just as we fear God and do no want to disappoint him. In order to have children that fear you in this healthy way, you must train them properly.

Most parenting is reactive, the opposite of proactive. Children are left to their own devices until these actions are irritating, and then parents verbally or physically whip them back into line.* This is why "spanking" gets a bad rap. Many parents have no idea what it means. They don't know how to properly train and discipline their children, therefore, they react poorly when their children are disobedient. They punish their children instead of train and discipline them. Parents must learn how to train their children. Just think of the relief that it would bring if by one command you could gain the absolute, focused attention of all your children.*

Babies are very smart little human beings.  They can learn from a very young age what "No" means. One of our children, when they were about eight months old, began squirming like crazy when trying to change their diaper. I would say "No" and give a little smack on the behind. It didn't take long before they would lay there without moving while I changed their diaper. No, this isn't child abuse or punishment. This is training and if done in the correct way, produces beautiful fruit: well-behaved children. By teaching them "No" you can teach them to not pull your hair, your glasses, etc. by the same process. Consistency is the key. They have to know that they must obey you. The earlier you do this, the easier it will be when they get older. As long as you remain consistent, the child will consistently obey.*

"It's time to go to bed now, children." "Okay, Mom," they all say and get ready for bed. Once they are in bed, there is no getting out of bed for a glass of water. There's no threatening, no scolding, and no need to 'punish' since they obeyed you the first time. How do you accomplish this? As soon as your children are doing things they shouldn't do {like putting their fingers close to outlets}, you train them to understand the word "No." We would give our children a small smack on the hand if they disobeyed us and continued to reach. Our goal was for them to hear "No" and obey us immediately. They quickly knew what "No" meant and obeyed us. However, there came a time when they were unwilling to obey us; somewhere between 18 months and two years old. It was a battle of the wills and who would have authority. It happened with all four of our children. It took a while {this one time of open disobedience} until they finally obeyed us. Their willingness to disobey us had been nipped in the bud at a very young age. Thereafter, all we had to do is say "No" and they stopped immediately. We trained them early to do what we asked them to do because we meant what we said and were consistent.

Like I said in my introductory post on this book, Ken and I had not read this book when we were raising our children but we both knew we didn't want to raise disobedient children. When our first daughter had her first and last "temper tantrum," we had no idea it would take hours of disciplining but we knew that it was very important to show her that she was going to do as we say. This takes "patient perseverance" as the Pearls call it. When we had the other children, we were prepared for their first episode and Ken and I would take turns. It wasn't fun for any of us but we were both very serious about our children obeying us as God has commanded them to do. Therefore, when we read what the Pearls said about it, we understood it completely.

The best trained child will have at least one time in his young life when he will rebel against authority and attempt to take control of the reins...If you win the first confrontation, the child wins at the game of character development.* We reaped many wonderful benefits of doing this the first time. Yes, it can be difficult emotionally, but it is time well spent. It makes the rest of the years raising them much more enjoyable for everyone.

If you expect to receive instant obedience, and you train them to that end, you will be successful. It will take extra time to train, but once the children are in general subjection, the time saved will be extraordinary. Some people say, "Child-proof your home." I say, "Home-proof your child."* By doing this, you are making it easy for your children to obey God's command to them; Children, obey your parents in all things: for this is well pleasing unto the Lord {Colossians 3:20}.

We never had to promise our children a reward for good behavior. We never had to say this to them;"Now, if you are really good in the store, I will buy you a treat afterwards." I never had to bribe them to obey me. There was never "1 - 2 - 3. Okay, now you're going to get it." Nope. Just, "Okay, kids, it's time to go home" and they would get ready to go home. We never had to ground our children either. So many parents would never dream of "hitting" a child but then would slap them across the face when the child was older and the parent was sick of the backtalk. They have raised their children threatening to discipline them but never following through so the children grow up to be undisciplined with lack of self-control. These children usually grow up to despise their parents. You don't have to put up with this nonsense. Learn from those who have raised obedient children. God commands older women teach younger women how to love their children. Love them enough to discipline and train them properly.