Seeking a Career "Just in Case" 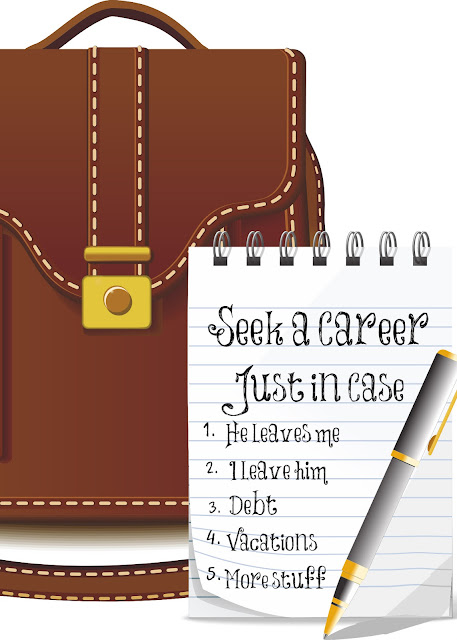 There is a troubling trend going on now. More men are becoming stay-at-home dads while the mothers go off to work full-time. With women taking over the colleges and careers, once they get married, husbands often times don't want their wives giving up their careers with the financial security they provide. Some women make more then their husbands so the husbands decide they'll stay home while their wives goes to work. Many women today go to college and get careers just "in case;" not understanding the trap they may be setting for themselves in the future.

None of this is good or God's plan for us, women. God commands the men to be the providers and women to be keepers at home with the children. Once feminism convinced women to leave their homes and pursue higher education and careers, many women have become stuck in their careers because they make more money than their husband or their husband doesn't want to give up the money his wife is earning. It's a no-win situation!

Many men don't want to work much anymore or provide for their families. I mentor women in this situation. They are the breadwinners for their families. Once these women learn their God ordained role and want to come home, their husbands often won't let them because of their wife's career. Careers trap women. They don't free women. Do you see how Satan twists things that sound so good to become so bad for women?

Getting a career "just in case" leaves out God in the equation. I had a pastor's wife comment on a post and told me her husband wanted her to work "just in case." It's sad how far we have come from God's roles for us. When I was growing up, my pastor's wife worked full-time and was rarely around except for on Sunday mornings. If the church isn't going to teach and model women being at home taking care of the children and home, who is going to teach or model it? How can a church teach women to be keepers at home if the Pastor's wife has a full-time career? A woman just yesterday sent me an email about her pastor telling her she was "judging" another woman for sharing with her about being a keeper at home because she was working herself ragged in two jobs outside of her home. When we get scolded by a pastor for teaching women to be keepers at home, it's a sad day for the Church.

I don't care if your husband is better at home and wants to be with the children and you love your job and make a lot more money. This isn't God's plan for either of you. Just because our society tells us something is fine and dandy, doesn't mean it is. We need to stop doing what culture is doing and begin obeying what the Word commands us to do.

To end this post, I want to share what Kelly Reins shared on her Facebook page yesterday, "On to my next shop, an older woman strikes up a conversation with me. She's in her eighties and spoke of the change she's seen by the affects of feminism on womanhood. 'Women no longer have children nor want them. They have jobs. And men have changed too. They want wives with jobs.' I mention the feminism in our culture and her eyes light up. 'Women have bought it and it's destroyed their dignity.' She proceeds to show me a photo of her recent family reunion, it is full, edge to edge with family members, 'This isn't all of them,' she tells me. She is the mother of nine and her children are well on their way to building their large families. 'I wanted nothing to do with children. I thought they were brats because I was a brat. The Lord did it all and I got to be a part of it. Who would have known what a joy grandchildren would bring.' She encouraged me to study theology and 'Be absolutely sure not to believe anything that isn't true. I have a grandson in his early twenties graduating from college and he already has his home. He's told me that he absolutely will not marry anyone who doesn't understand her faith.' I've been invited to her home to visit and talk theology."

Trust in the Lord with all your heart
and lean not on your own understanding.
In all your ways acknowledge Him
and He shall direct your paths.
Proverbs 3:5, 6