Husbands Who Want Their Wives to Work 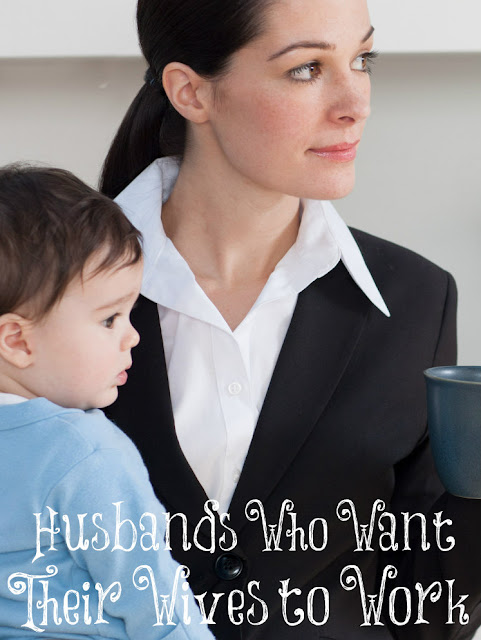 Mothers need to be home with their children full-time. Children need their mothers in order to grow up secure and emotionally healthy. There are many men today who don't want their wives home. They want their wives to work to help financially. These men were most undoubtedly not raised by their mothers full-time and they have a difficult time bonding to their wives.  In Home By Choice by Dr. Brenda Hunter she wrote, "If a man had a mother who was physically or emotionally absent for most of his childhood - if he was raised by babysitters or a succession of other caretakers - he will most likely not know what emotional closeness or intimacy feels like. So how can he possibly know what his child is missing? Also, he probably won't be in touch with his feelings. Perhaps in childhood, he simply walled off his anger and his yearning for closeness by repressing these unfulfilled emotions."

She goes on to explain how vulnerable the baby male is and how more die in the womb, at birth, get autism, and other things that don't happen to female babies nearly as often. "The point of this brief examination of male vulnerabilities is to assert that sons and husbands need the women in their lives to nurture them, appreciate them, and express interest in their lives. As little boys or as high-powered executives, males suffer from female neglect."  Little boys were created to have a mother supporting and nurturing them full-time and a wife to be a help meet to them when they became men. When they don't have this, they will suffer. She also explains the devastating effect upon males who do not have a close father figure in their life. Bill Glass, a former professional football player who works with prisoners, has visited hundreds of prisons and found that there isn't one male prisoner who loves his dad. The breakdown of the family has created problems in every area of our culture since it has affected males so deeply even when it comes to their own marriages and child raising.

Ken wanted me to work until I had my second baby but this was because we had very little money and he was still in seminary when I had my first baby. He always knew he wanted me to be home full-time with our children. He understood the importance of mothers raising their own children. We both were raised by mothers who were home with us full-time. In hindsight and knowing what I know now, we should have just moved into my parent's large home for those two years since they would have loved having us live with them and I should not have been away from my first born those first two years. It was not good for either of us.

What should a woman do if she has a husband who does not want her to be home full-time with her children? First, buy the book Home By Choice and have a good justification for being home, then find the right time to make a gentle appeal to your husband. Pray for wisdom and for the softening of his mind in this area. Then win him without a word! Be loving, warm, and affectionate to him even if he has a difficult time being close to you or doesn't share his emotions and feelings with you. He needs to be deeply loved and reverenced by you, especially since he probably didn't get the love and nurture he needed from his mother. He should also be reassured that you will be content living within his income and not always wanting more. You could explain how much cleaner and tidier your home will be, how much better his meals will be, and how much more you will enjoy intimacy with him since you won't be exhausted. It would be good to be able to show him how much it really costs for you to work as well. Add up all of the expenses that it costs for you to work and how much you could save by being home. In this way, hopefully, he will be convicted that it might well be worth it to have you home taking care of him, his children, and his home.

Can a woman forget her sucking child,
that she should not have compassion on the son of her womb?
yea, they may forget, yet will I not forget thee.
Isaiah 49:15