Believers Are Now Righteous and Walk in The Spirit ~ Romans 8:1-4 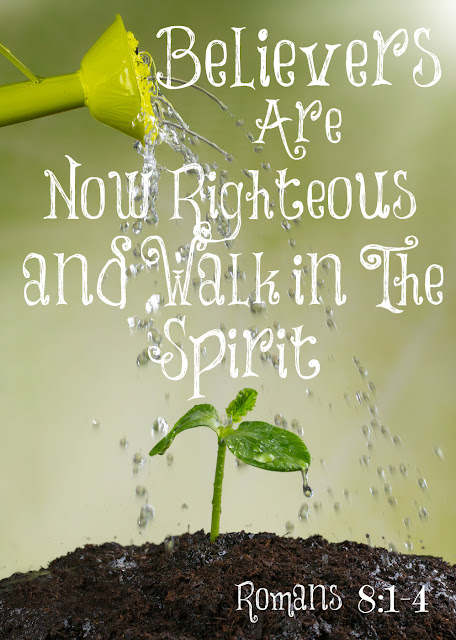 The whole of the New Covenant is to show us, as believers in Jesus Christ, that we no longer are a part of our old identity, our flesh since it was crucified on the cross with Christ's flesh. We have a brand new identity in Christ and we don't live like we used to anymore. We have put away our flesh with Christ and now walk in the Spirit in Christ! The New Covenant writers are continually reminding us of our new identity and to walk in it.

There is therefore now no condemnation to them which are in Christ Jesus, who walk not after the flesh, but after the Spirit {Romans 8:1}. Therefore {based on concepts preciously expressed} there is no condemnation {as there were under the Law in chapter 7} to those who are now in Christ. In Jesus Christ, we are not under the condemnation to the Law, and we are freed from the power of the flesh; we no longer walk after it.  The sweetest truth to a believer is that we who deserve condemnation are delivered from it by the grace of God. But this chapter is not primarily about release from condemnation; it is about release from the power of sin.

Romans 8 is an unequivocal statement of sure deliverance from sin, now and hereafter. In contrast to chapter 7, where we find man under the Law and walking after the flesh, those in Christ Jesus are not under the condemnation of the Law and do not walk after the flesh. Being in Christ is the opposite of being in the flesh. Those in the flesh cannot please God. Those in Christ have crucified the flesh and are let by the Spirit. Our primary goal or motivation, that which holds our attentions, gains our affection, captivates our energies, is what we will walk after. Those who are in Christ walk differently from those who are in the flesh. The unregenerate do not have the Spirit of God and therefore cannot walk after what they do not have. One doesn't walk his way into the Spirit and into favor with God; one walks in light of favor already bestowed.

For what the law could not do, in that it was weak through the flesh, God sending his own Son in the likeness of sinful flesh, and for sin, condemned sin in the flesh {Romans 8:3} The Law could not empower a man to walk after the Spirit instead of after the flesh. The fault was not with the Law. It was the weakness of the flesh. The one thing that caused the sinner to fail to obey the Law was not human nature and not an enslaved will. The problem causing sin was flesh.  That God should send His holy Son in the likeness of sinful flesh demonstrates once and for all the extent to which God is willing to go for this rebellious race.

Christ's flesh was like sinful flesh in that it too was weak. He hungered, grew tired, needed to sleep, aged, and was capable of bleeding to death. Christ's flesh was mortal flesh, as seen by the fact that it died as flesh dies. For Christ to put away sin in the flesh, it was necessary that He be totally identified with the flesh; the place where sin originated and set up its reign. To overcome flesh, He must dwell in flesh and be subject to its weakness and temptation. Jesus the man overcame in human flesh where all others failed. Jesus took part in flesh and blood that he might triumph in the same flesh that was the source and residence of all sin. It was only in Christ's fleshly body that God condemned our sin and by so doing lifted condemnation.

The habits of sins in the flesh darken reason, sear the conscience, distort the affections, captivate the will, and leave the mind reprobate. Sin has a seat. It is the fleshly body. God condemned sin by crucifying the sinner with his sin {Romans 6}. Remember, Paul represented sin dwelling in his members as a rule of law, a working principle, a force in conflict with his own will. He cried out against it. The condemnation of sin resulted in our being able to actually do righteousness. This is absolutely essential to our understanding of the entire book of Romans and to Bible doctrine. Paul must show that Christ does what the Law could not do; terminate sin in the flesh. He is commending the gospel because it works to separate the sinner not from just the guilt of sin, but from sin's very power.

The two inseparable things occurred in the execution of Christ's flesh:1. In the death of His flesh, He paid the price for our sin, 2. When His flesh died, our flesh died with Him, freeing us from sins in the flesh. Christ died for us; we died with Him. This is the full gospel. It is wonderfully true that the believer's sins were imputed to Jesus Christ and God judged them in His flesh - condemned them. The condemnation of the Law was once and for all lifted in the work of Christ for us. It is not the power of sin in the flesh that is destroyed, but the very flesh itself. Knowing this, that our old man is crucified with him, that the body of sin might be destroyed, that henceforth we should not serve sin {Romans 6:6}.

That the righteousness of the law might be fulfilled in us, who walk not after the flesh, but after the Spirit {Romans 8:4}. Christ condemned sin in the flesh of Adam's race; destroyed its power by crucifying the flesh so that the righteousness of the Law would actually be lived by those of us in Christ who can now walk after the Spirit rather than after the flesh. What the Law could not do, Christ did. The assumption of the text is that all believers do indeed walk after the Spirit and live righteously. The Scripture stands alone, apart from experience. All of this is something you need to begin believing by faith since God told us this is how it is once we believe in Him and the New Covenant writers consistently urge us on in our new identity.

Please listen to Mercy Me's Dear Younger Me. They understand clearly who they are in Christ!

*Next verse begins HERE. The series begins HERE.
***From Michael Pearl's teaching with some of my thoughts.