How NOT to Raise Feminist Boys 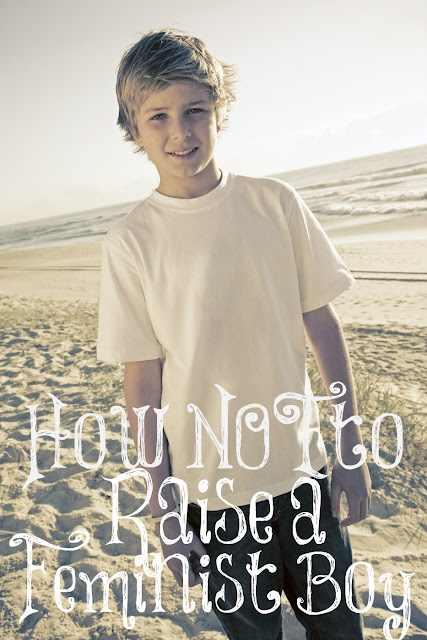 There is an article called 18 Ways to Raise Feminist Boys. This article will cause you to grind your teeth; it is so terribly tragic.  It encourages you to buy dolls and play house with your sons. Let him polish his nails and wear a tutu. Tell him to read books of strong women. "Bust the myth that boys and girls are vastly different." Show him how to "respectfully" text someone when the time comes for them to have sex with them. Without God and His principles guiding our lives, chaos reigns very quickly. This is the end result of feminism.

In contrast to this article, I wrote a post about raising my sons called Raising Responsible Providers, Leaders, and Men of God. You see, the goal of feminism is for women to be "equal" with men in every single way. Therefore, they need to raise little boys to be like girls and little girls to be like boys. I'm not sure what they want boys to grow up to be, women? They should be raised to be men; men who work hard and provide for their families. Now that most of the women have careers and don't need men, many men are not sure of their role in society. Even in marriage, they are "partners" in marriage, although the women are usually the leaders and will mostly get what they want.

In schools, children are learning they can be boys or girls. It's their choice. The seed has been planted. As they grow, the seed is continually watered by what is going on in our culture and what they are seeing and learning. "You get to choose! If you're not happy with being a boy, be a girl!" The seed begins to sprout, take root, and grow until the children grow up and decide they don't like what they are; they want to become the opposite sex of what God created them to be. Then when lust hath conceived, it bringeth forth sin: and sin, when it is finished, bringeth forth death {James 1:15}. Don't allow those seeds to be planted in your children's mind. Tell them they were created by God in your womb to be exactly who they are at the minute of conception. Plant seeds of Truth into their minds and keep watering them with Truth! This is up to you since God commanded you to raise your children in the nurture and the admonition of the Lord.

Raise your daughters to be women. Raise them to love the idea of marriage, motherhood, and being a keeper at home. Raise them to be modest, discreet, good, and sober. Give them baby dolls to play with. Have them cook and clean with you. Dress them in feminine clothes.  Raise your boys to be men. Raise them to work hard, love the idea of marriage, fatherhood, and being a provider. Teach them to be sexually pure and men of integrity. Raise them to enjoy trucks, balls, being brave and not afraid. Resist the devil by teaching them the Truth of God's Word and to hide His Word deep in their heart.

We don't need feminist boys in our culture. We need strong men who aren't afraid to be men. Men who are masculine and take their role seriously. Raise these kind of men. Be in rebellion to the ways of our culture and in obedience to the ways of the Lord!