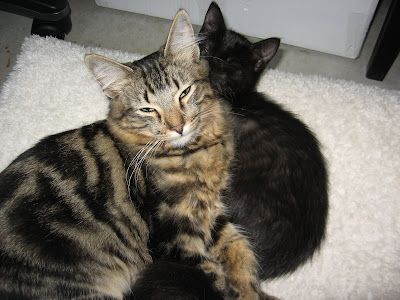 Yes,  I did it.  We are now the proud owners of three cats.  Just six months ago, I told everyone I was never going to get another cat.  I am 52 years old and I want less responsibility.

Six years ago, Alyssa adopted an abandoned kitten in Jackson, Mississippi.  He, Gilroy, got mean because he was left alone all day, so she asked if she could bring him to live with us.  Ken said, "Yes" and he was an okay cat.  He comforted me a lot through the pain I had with my neck.  I would wake up and he would be asleep on my lap.

Several months ago,  I decided we should get another cat.  Gilroy seemed lonely and he bites you if you pet him for very long.  I thought he needed a friend and it would make him happier.

So Cassi found Rascal and we adopted him...The BEST cat I have ever owned.  Soft, beautiful, gentle, and cuddly.  You can do anything to him and he won't bite.  One problem...Gilroy can't stand him.  He hisses at him all the time and wants nothing to do with him.

Rascal was lonely.  He needed a friend, so I asked Ken if I could get a friend for him.  I am fairly impulsive, so once I decide to do something, I do it.  I found this little black kitten yesterday.  Rascal was elated.  (My family thinks she's ugly and I should have waited to find a cuter one, but she seems very sweet.)

Rascal and the new kitten have been playing non stop and cuddling with each other ever since.  Gilroy now hates them both...He won't even go in the little garage to eat because the two little kittens are in there.  This is a good thing since he could lose some weight.  I have never been able to put him on a diet, because he bites your feet if he wants food (NOT a good habit).

So now I have three cats...I have no idea what I was thinking.  Hopefully, Gilroy will start liking the other two.  I am writing this post for my family.  They think I am crazy, but I do have my reasoning...I love Rascal.  It was all for him!  Is that bad?  Can you make a mean cat nice?

P.S. Does anyone know a good Bible verse about cats?

Other interesting posts ~
Is Drinking Alcohol A Sin?
What If He Died?

Posted by Always Learning at 2:51 PM