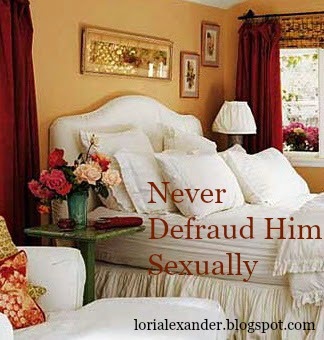 It seems the majority of women would hate the idea of giving their husbands sex three times a week. Yet, the majority of men would love to have it at least that often. How do we come together with this difficult issue? Thejoyfilledwife made an amazing comment on a post written by a man who said that as a husband and head of his wife, he could tell his wife he wanted sex three times a week. Of course, one woman was very upset with this comment and thejoyfilled wife responded ~

I immediately recognized that your "3 times a week" comment was you toning things down quite a bit, since you and your wife have been very open about the frequency of this important part of your marriage.  I also recognized that that comment would garner at least one negative comment, since, for some reason, this is an area of marriage that is often viewed as optional or that shouldn't be participated in unless both spouses are "in the mood."

Imagine how quickly marriages and families would disintegrate if we had that standard for all areas of responsibility. If we had moms refusing to bathe their children because they didn't "feel like it" and husbands only willing to show up at work when they're "in the mood"...or the father coming home after a week of traveling for work to children who are lethargic and weak because mommy simply didn't "feel" like feeding them while he was away. Can you imagine the implications? Yet one of the most important responsibilities in our marriages, so important that it was made a command and is considered barbaric to most wives, unless it is by mutual consent.

I have been asked many times how in the world I was capable of saying "yes" to my husband sexually, even amidst severe morning sickness that lasted all nine months for both of my pregnancies. Or how I was willing to smile and express delight for my husband during intimacy, even when, inwardly, I was beyond exhaustion.

It's really not rocket science. I just made the decision to never say "no" when we got married. Call me crazy, but I took the command seriously. It really doesn't matter what I feel like toward my husband. My desire is to obey God. Denying my husband his marital right is sin and I sure don't need to willingly choose to sin more than I already do!

Just to clarify what I meant by "It doesn't matter what I feel like toward my husband..." I didn't mean that I don't desire my husband. I VERY much do. I only mean to say that, even if my husband and I have an argument and I really don't feel like being intimate, those feelings don't dictate my actions.

And my husband is very gracious and doesn't ask me if I have the flu...or obviously if I have just given birth...but I really try not to show my mere tiredness to him, or to mention it at all, because that can be pretty common when you are caring for a newborn and homeschooling a small child. Tiredness is a fact of life at this phase of child-rearing and I certainly don't want to allow this time of tiredness to keep my husband and me from thriving in this area of life...especially since, one day, the kids will be gone and we will have the home to ourselves again. I would rather keep the home fires burning now, so that time will arrive after great anticipation.

***HERE is thejoyfilledwife's encouragement for those women out there who have higher sex drives than their husbands and have a difficult time relating to this post.