Jesus is Welcomed at the Movie Theater 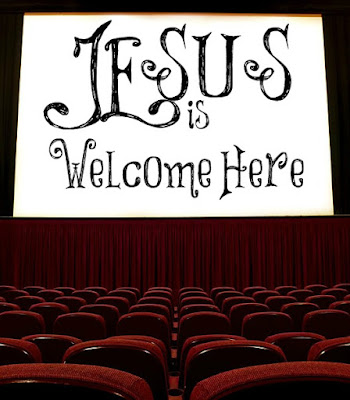 The only time you hear the name of Jesus in the movie theater in the past many years is when it is followed by a string of profanity. However, I heard War Room was a good movie so I decided to go yesterday. I usually dislike the previews before the real movie. They are full of trash. However, I got there in time to see all of them, since I wanted a good seat.

The best preview was about a movie called Woodlawn.  It is about an inspiring true life story of a football coach in a school torn by racism and hatred in the 70s but is healed through a miracle of love and unity. The name of the miracle who brought unity and love to the school was JESUS.

Then War Room began. {Women, don’t wear makeup and bring LOTS of tissue.} Fireproof and Courageous were pretty good but this movie is FABULOUS! The struggling marriage isn’t only the husband's fault in this one, but the wife gets the blame also. A godly, older woman mentors the wife and teaches her how to fight for her marriage the right way with the right weapons. My kind of movie!!! In fact, this was the most powerful movie I have ever seen.

I did notice that the couple in the movie never kissed. I'm wondering if it is due to one or both of them being married and being committed to their marriage vows in real life. {I sure would NEVER want Ken to be kissing another woman for his job!} Also, there is absolutely no immodesty in the movie. The word "submit" is used. The fact of careers conflicting with bearing children and mothers being too busy with their careers are brought up. Hey, this movie is as politically incorrect as I am; no wonder I loved it!

Please go see it and take a friend who is in a difficult marriage. If you are able, pay for her ticket or watch her children so she can go and see it! Take a friend who needs to hear the Gospel. Yes, this is only a movie, but I have witnessed the events that take place in it over and over again in real life!

Seeing previews and a movie that glorify the name of JESUS was so overwhelming to me in this dark hour of our nation. As long as King JESUS is on His throne, there is HOPE! And guess what, He’s NEVER leaving His throne!!!

If my people, which are called by my name, shall humble themselves, and pray, and seek my face, and turn from their wicked ways; then will I hear from heaven, and will forgive their sin, and will heal their land.
2 Chronicles 7:14

***Listen to this testimony of a mother who spent a lot of time in her "war room" for her prodigal son who lived a promiscuous homosexual lifestyle, became a drug dealer, was imprisoned and contracted HIV.

The effective prayer of a righteous man can accomplish much.
James 5:16