Dealing with Her Horrific Temper 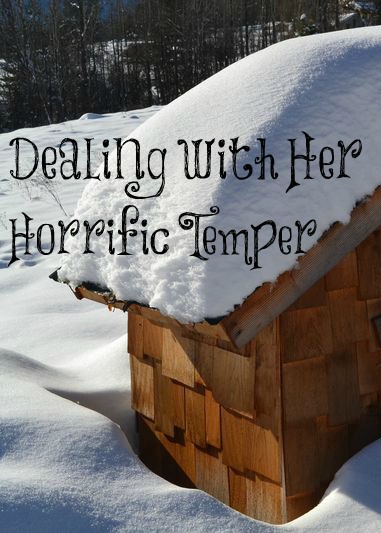 Many men have NO idea what to do if they have a difficult wife who throws temper tantrums, throws stuff at them and tries to hit them. Joanie read my post When Words Won't Resolve Arguments and wrote an interesting comment about her experience and how her husband put a stop to her out-of-control behavior.

I did not know the Lord when I married my husband {though I was raised in a religion I won't name; I honestly knew nothing about having a personal relationship with Christ} and I had a horrific temper. No one was gonna tell me what to do {I had rebelled against authority since I, well, could.}. If we had a disagreement, I would typically flop on the bed to pout and wait for him to come try to comfort me. If he did and I didn't get the result I wanted, he would leave me to pout and this would enrage me - look out. I would throw books and shoes and anything I could get my hands on and hurl bad words and if he tried to calm me, I would swat at him or ram him. I don't know how he stood me. He would restrain me many times - I guess like a bear hug. I would fight like a wild cat, but I never won, of course. I'd wear out eventually and he would lovingly get me calmed down.

What a sweet man {married 33 years now}. One time I was throwing a tantrum and he picked me up and carried me outside and deposited me on a snow covered dog house! I huffed and puffed a few more times to show I was not gonna take that, but he told me he would do it again, but in the end I had to wind down because as much as I told myself I was big and bad {I wasn't}, I knew he was bigger. Honestly, it is hard to believe I ever acted like this. He says today he saw a diamond in the rough back then. I am so grateful. Today, I try to sense what he wants or sees as direction and work to make it happen because I trust him so.

Her husband refused to let her get away with her terrible behavior and put a stop to it. She is thankful that he did. He loved her enough to do it. Of course, we got many comments accusing of us supporting domestic violence. I made it VERY clear in the post that I do not support domestic violence in ANY way. However, many men are being treated extremely disrespectful and mean by their wives, yet no one would say these wives are causing harm to their husbands but they are, deep harm. Many men are suffering in silence from the way their wives disrespect and treat them, yet they aren't supposed to be able to do anything to try and stop them as long as it isn't in anyway abusive? Yep, this is a feminist mindset that has men afraid of women today and keeps women in control.

For this is how the holy women who hoped in God used to adorn themselves, by submitting to their own husbands,  just as Sarah obeyed Abraham, calling him lord, and you have become her children if you do what is right without being frightened by any fear. 1 Peter 3:5, 6