Raising Children Without Much Stuff and NOT Spoiling Them 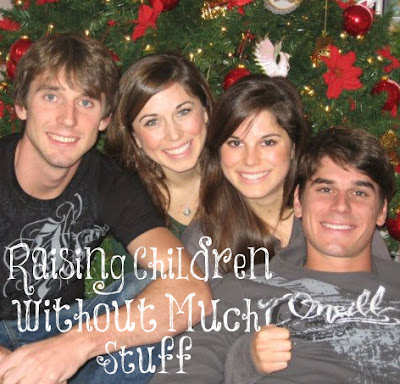 We were up in Wisconsin recently and we watched family home videos. Steven's new bride, Emily, and Cassi's husband, Ryan, wanted to see what their spouses were like as children so we watched several hours’ worth. It was enlightening to me and I noticed some things Ken and I did in raising them.

There were rarely any toys on the floor. We never bought them a lot of stuff. Most toys that are bought for children are played with several times and then neglected. We never wanted our children to have a lot of stuff. They had balls, bats, a couple of stuffed animals, games, puzzles and a swing set. They spent most of their time playing with the balls and dancing around with each other. They didn't need much to be entertained.

Women tell me they can't have more than one or two children because they are TOO expensive. A mother of nine wrote this in the chat room recently ~

I was not raised in a home that was wealthy. I grew up on a dairy farm so we didn't have a lot and I can tell you that has been one of the biggest blessings in my life. We didn't vacation; we didn't shop at the mall; our birthday and Christmas gifts were quite small. My favorite Christmas as a child was the year my parents could not afford to buy presents. My aunt sent some of her old costume jewelry for us girls and my mom made me homemade turtle necks and homemade underwear. My mom feels terrible about that Christmas and I always tell her don't that's my favorite one! I felt so loved that Christmas. When you strip away excess it creates room to build relationships. That's what children remember.

We also didn't want them to be spoiled or act spoiled so we didn't baby them. If they fell and cried, we ignored them; but only if it wasn't a bad fall. Children are hurting themselves and crying often. If you are always running to them and hovering over them every time they hurt themselves, they will grow up complaining about every ache and pain and looking for attention. When they were sick, I wouldn't let them complain. I'd rock them and give them what they needed, but I never babied them unless they were truly injured. As a result, my adult children are all tough when it comes to pain. They don't complain and look for sympathy. In fact, Erin told me she doesn't even know when Ryan has the flu since he won't complain about it. Life is tough and full of trials. Train them in this way when they are young and they'll know how to handle it when they are older.

I also saw clearly in the home movies that whenever Ken asked them to do anything while he was filming them, they would do it immediately; no arguing or complaining. When he told them to come, they would come. If he told them to dance, they danced! They were obedient children. They obeyed cheerfully from the time they were young. In the several hours of watching the videos, not once did Ken or I have to ask them to do something twice. They grew up obeying their teachers, coaches, bosses, government and most importantly, God!

From the time they were little, they were memorizing Scripture. When Steven was three years old, we asked him to tell us his verse for that week at AWANA and he would say it easily. All their growing up years, they were memorizing Scripture, singing praise songs and hearing the Bible read to them. They were also in church almost every week. They knew it was a priority. As adults, they've always gone to church. Wherever they've been in life, they went to church.

We were affectionate with the children. We consistently told them we loved them, were hugging them and praising them when they did well. You could hear us training our children even throughout the home movies. We all laughed a lot and had a great time watching them.

We loved raising our children. Yes, it took a lot of hard work, time and sacrifice but it was all completely worth it! {Take lots of movies when they are young; they'll enjoy watching them when they're all grown up!}

He maketh the barren woman to keep house,
and to be a joyful mother of children. Praise ye the LORD.
Psalm 119:9