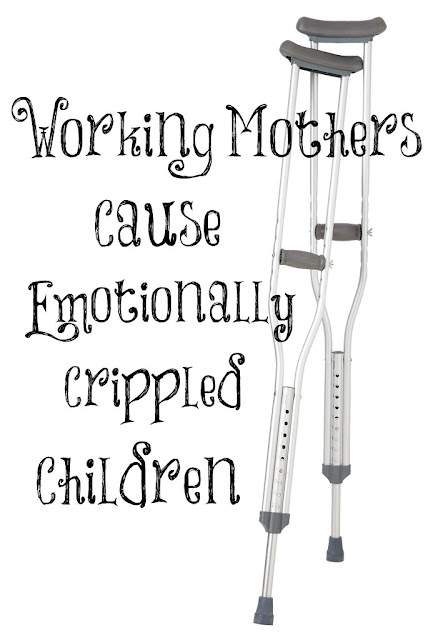 We think we can go against God's plan for our life without any repercussions, but we can't! Dr. Armond Nicoli, a psychiatrist on the faculty of Harvard Medical School, wrote a paper on the trends that are causing the destruction of the family which leads to a generation of emotional cripples. He said the number one cause of the breakdown of the family which leads to emotionally crippled adults is divorce.

"The trend toward quick and easy divorce and the ever increasing divorce rate subjects more and more children to physically and emotionally absent parents. The divorce rate has risen 700% in this century and it continues to rise. There is now one divorce for every 1.8 marriages. Over 1 million children a year are involved in divorce cases, and 13 million children under 18 now have one or both parents missing."*

This article was written in an edition of Christianity Today in 1979 so the statistics are probably much more dire today. Yep, I just checked out the present day number and it's a whopping 24 million children live without a father! The effects are devastating! This doctor also adds, "What has been shown to contribute most to the emotional development of the child is a close, warm, sustained and continuous relationship with both parents. Yet, certain trends in our society make this most difficult." And we wonder why the use of anti-depressants is sky-rocketing!

The second cause of the breakdown of the family resulting in emotionally crippled adults is married women with children working outside the home. Dr. Nicoli says, "My clinical experience indicates clearly that NO women with young children can do both at the same time, without sacrificing either the quality of work or the quality of child care."

Are we surprised? It shouldn't take a rocket scientist or a psychiatrist from Harvard to find out that God's Word is Truth. I get by far the most opposition from the posts I write about women being keepers at home as if I'm a judgmental, mean person. Am I writing this because I hate women and want to make them feel guilty? No, I write not only because God commands that I teach young women to be keepers at home but also I want to see strong marriages  with children being raised by their mothers.

I was watching Extreme Weight Loss last week and a mother had her son in daycare. One day, she received an emergency phone call from them and was told that her son had suffered a seizure and was non-responsive. The doctors were able to figure out that the young child had brain trauma from being shaken so hard. He almost died. He is a young adult now but will never be normal. This woman feels intense guilt for not taking care of her baby and leaving him in the hands of others. God commands women to be home with their children; protecting, nourishing, training, and guiding them. Children want and need their mothers. Mothers provide many things to their children that no one else can. God knew this because He created children to need their mothers and mothers to be with their children. Why else do you think we are blessed with a womb, breasts and a sensitive spirit?

Feminists talk about women power, yet the greatest power women can give their children, including their daughters, is to be home with them. We are seeing the destruction of mothers leaving the home everywhere; divorce is rampant and children are growing up lacking self-control with emotional problems. Little boys are being put on Ritalin at very young ages when they should be home playing outside; running, jumping and climbing. Girls are growing up to not want to cook nourishing food or take good care of their homes. Daughters need to have a godly example of a wife and homemaker, so they can grow up to be a godly wife and homemaker raising some of their own godly children, if the Lord blesses them with children, instead of being stuck in a 9:00 to 5:00 dead end job. This is what women fought so hard for? They should be home taking care of their families, if they have them. There would be a lot more families for women to take care of if this was where they put all of their time and energy into, instead of pursuing careers that keep them away from being able to be home full-time nurturing their husbands, children and home. It's all so messed up.

Women are also to be keepers at home to care for their husbands and be a help meet to them. When they work outside the home, they are exhausted. They usually don't have much time to care for their husband and be a help meet to him, plus they now expect their husband to help in their role as mother and keeper at home. This confusion of roles has led to MANY divorces; leading to the destruction of future generations. Women need to do everything in their power to keep their marriage strong. They need to love their husband and be home with their children; for this is the greatest gift they can give their children if they want the best chance for their children to grow up to be emotionally well-adjusted and content. 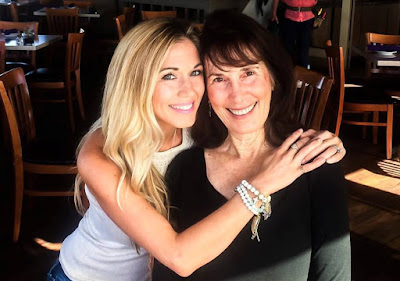 This is a picture Alyssa, my oldest daughter, posted on her Facebook page last night with these words, "Happy pre-birthday to this Mama of mine, who despite many years of pain and suffering is the happiest person I know. Thanks be to Jesus. Love you Mom!"  We went out for my birthday. Someone else raised her the first two years of her life while I worked as a teacher which I disliked intensely. However, after those two years, I was blessed to be home with her full-time, along with my other three children, all of their growing up years. I wouldn't have traded ONE second of any of it for any career, no matter how much it paid or how little we had to live on!

That they may teach the young women to be sober, to love their husbands, to love their children, To be discreet, chaste, keepers at home, good, obedient to their own husbands, that the word of God be not blasphemed.
Titus 2:3, 4

* Taken from John MacArthur's sermon on Divorce and Remarriage.