Should You Divorce Over Emotional Abuse? 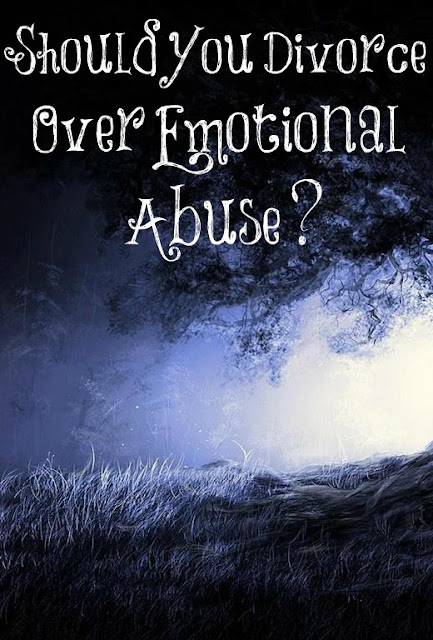 Deborah agreed with the Breathe Fire viral post as MANY women did but disagreed with my response. She recently left her marriage because she felt she was being emotionally abused. Should this be a reason to divorce one’s husband? TheJoyFilledWife responded to Deborah.

I can relate to having experienced emotional abuse in my own marriage at one time and I know that sometimes we feel like we fall short of being able to express exactly what it feels like to face that. I was at that place for a couple of years and although I know that the road is not an easy or pain-free one, God will bless us when we choose His ways and trust that He will be true to the promises of His Word.

I want to address a couple of concerns and ideas you bring up here with as much sensitivity as I can; knowing what it feels like in some ways to be in both your's and Anna's shoes. Coming out the other side, I can tell you that my husband would probably have fallen deeper into the pit if his wife and only confidant were to have "breathed fire" and attempted to make him cower, instead of won him without a word by my behavior and the undeserved mercy I showed him. Women have plenty of natural "power" and the greatest of all is the one they yield in their marriage. The trouble is that most wives are not content to use their God-given abilities in the way that God intended; which is to serve their husband, to make a godly appeal, to raise godly children, to win their husband through their behavior, or to fulfill him sexually by giving herself to him fully. Instead, they want to force their husbands to hand over the authority that God gave them as the leader so that she can be in control and have things her way.

There is absolutely a strong belief that women are spiritually superior to men. Read the comment section of any Christian female blog and you will see that clearly. The truth is, Deborah, that while they are plenty of abusive men out there, I have known far more emotionally, mentally, spiritually, and even physically abusive wives than husbands. I see it with my own eyes in the way they demeans him in front of others, withholds herself sexually, shouts, threatens, cuts him down when he discusses Scriptures, and rebels against his authority on almost every subject. We need look no further than the first book of the Bible to see that, from the beginning, women have been using their "powers" to usurp the authority God gave to man and challenge his headship. God created women to be a help meet to their husband's needs and take care of their part so their husbands are free to work toward the purpose God has for them unencumbered.

I want to lovingly warn you, dear sister, that you are allowing yourself to fall right into the enemy's trap if you have convinced yourself that to "breath fire" means to simply have confidence. The author {who the enemy has quite effectively used in this article} made it very clear that she believes a wife should be able to make her husband "cower". That's just downright wrong. I'll be honest with you, Deborah, I know thousands of truly confident people who command, not DEMAND, authority and they have the respect of all those who know them. People who walk around making people cower are not confident people; they are insecure people who put on a show to hide the pain and inferiority they feel inside. Satan is a prime example of this. Satan was discontent with the role he was given and when he was kicked out of heaven, he found that the only way to hide the fact that he is a defeated foe is to walk around "breathing fire" and trying to convince everyone that he has ultimate power. I don't know about you, but I would much rather raise daughters to walk around "breathing life", rather than death and destruction.

If a woman is in an abuse situation, she absolutely must seek help, just as I did. If she's in danger, she should remove herself from the home. As far as divorce is concerned, though, I see no Biblical allowance for divorce in such a case. We must seek necessary protection, yes, but a wife who divorces her husband has zero chance of winning him without a word. I am a firm believer that Christ's ways prioritize repentance over rights and mercy over condemnation. Truly, we need look no further than the cross to see where God's priorities lie.

I call heaven and earth to record this day against you, that I have set before you life and death, blessing and cursing: therefore choose life, that both thou and thy seed may live.
Deuteronomy 30:19