Should Women Be Taught to Breathe Fire? 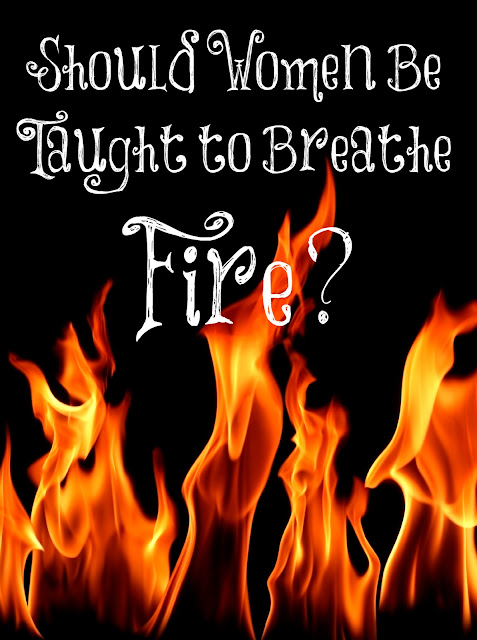 "I'm not sure if you've read this, but this article shows you how far off the mark girls are being raised. It also goes to show what Debi Pearl has often said, which is that our society falsely believes that women are spiritually superior, but, as you can see by this article that has gone viral, we are much more easily deceived. This is shockingly heartbreaking. It goes against absolutely EVERYTHING the Bible teaches a woman to do. How sad. Our society is not better when women rely on men less. In fact, because we have told men we no longer need them we have taken away much of their desire to take responsibility for the woman and children in their lives."

These words were texted to me by TheJoyFilledWife whose husband was addicted to pornography in the past and caused her much pain, yet she responded in a biblical way, not a worldly way as this article she refers to suggests. This is the last paragraph of the article.

As a mother of daughters, this makes me ill. Parents, WE MUST DO BETTER BY OUR DAUGHTERS. Boys, men, are born with power. Girls have to command it for themselves. They aren’t given it. They assume it and take it. But you have to teach them to do it, that they can do it. We HAVE to teach our daughters that they are not beholden to men like this. That they don’t have to marry a man their father deems “acceptable” and then stay married to that man long, long after he proved himself UNACCEPTABLE. Educate them. Empower them. Give them the tools they need to survive, on their own if they must. Josh Duggar should be cowering in fear of Anna Duggar right now. Cowering. He isn’t, but he should be. He should be quaking in fear that the house might fall down around them if he’s in the same room as she. Please, instill your daughters with the resolve to make a man cower if he must. To say, “I don’t deserve this, and my children don’t deserve this.” I wish someone had ever, just once, told Anna she was capable of this. That she knew she is. As for my girls, I’ll raise them to think they breathe fire.

Psalm1Wife emailed me her response to this article also ~

In the wake of the Joshua Duggar adultery confession, a blog post empowering women to teach their daughters that they can "breathe fire" has surfaced and went viral. The problem is that the woman who wrote the post has Anna Duggar's priorities all wrong.

She says, "Anna Duggar was taught that her sole purpose in life, the most meaningful thing she could do, was to be chaste and proper, a devout wife, and a mother. Anna Duggar did that! Anna Duggar followed the rules that were imposed on her from the get-go... While she was fulfilling her 'duty' of providing him with four children and raising them. She lived up to the standard that men set for her of being chaste and Godly and in return, the man who demanded this of her sought women who were the opposite. 'Be this,' they told her. She was. It wasn't enough."

Joshua is fallen and although men were created in God's image, there are no promises that a meek and gentle spirit is beautiful at all times to all men. We are promised, however, that it is beautiful to God. There are no promises that we will win our disobedient husband without a word, but we are promised that we are honoring God by doing so. We are not promised that if we stay with our husbands instead of divorcing them that they will stop sinning against us, but we are promised that God will find favor with us through our steadfast commitment to the finality of our marriage vows.

This woman thought Anna was let down by "men" because they led her astray but Anna is not following "men", she is following the Lord's trajectory for her life and she has a promise that God will never lead her astray.

Teaching our daughters to act like men and be empowered through mantras like, “You can breathe fire” is NOT what God has called Anna to do and so we can all pray for her and support her in her decision to honor God through her actions and be a witness to this lost nation through her continuation to honor and obey Joshua, because that is what the Lord would have her do and He will never leave her nor forsake her.

This article was also posted in the chat room and Robin, who is being faithful to a wayward husband, responded to this “breathe fire” article this way ~

A wayward husband “cowering in fear” of his own wife isn’t going to benefit his soul, or her heart. Cowering in contrition in the fear of the LORD? Maybe, unless he IS already repentant, and then we don’t need to keep beating him up; we are called to strengthen him and encourage him as he rebuilds relationship with his wife and family and community. This article is disgusting. Utterly disgusting. "Woman Power"..."You go, girrrrrl"....YUCK! All this does is place the woman in a position of perceived power, instead of Christ as the center of their marriage. There's my .02 for what it's worth, as a wife who is surviving her husband's porn use and sexual addictions. I'm not a victim of him; HE'S A VICTIM OF HELL. If men repent, we are to stand by them. Even if they don't, we're to intercede for them and be firm with truth spoken in love toward them, and call for men of God to stand with us!

My conclusion: God wants us to live and breathe faith; complete dependence upon Him and believing that what He says is Truth, NOT to breathe fire and the foolish, selfish ways of this world.

For the wisdom of this world is foolishness with God.
1 Corinthians 3:19

***I don't expect this post to go viral since most women can't handle the Truth!