Infanticide ~ 40 Years of Child Murder on the Altar of Sanger 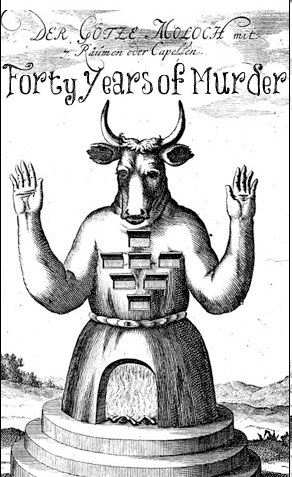 {This is a guest post by Andrea Roltgen. She's madly in love with her husband and a mother to ten children. The oldest is a homeschool graduate and in the USAF and the youngest are twins with every age in between. She's anti-feminist and relishes her role as wife, mother, homemaker and most importantly, a follower of Christ!}

In January, Margaret Sanger's disciples and abortion lovers have much to celebrate. It will be the 40th year of legally sanctioned abortions in the United States. At the time I am writing this, the death toll of murdered babies via abortion methods is 55,110,996, and it climbs every few seconds.

These murdered babies are predominately black babies. Where are the crusaders for social and racial justice, for the worst racist genocide in human history?

Whatever the intent of the abortion industry may be, by functional standards, abortion is a racist institution. In the United States, black children are aborted at 5 times the rate of white children and Hispanic children don't fare much better. Abortion is the leading cause of death among black Americans. We can debate the racial intent of Planned Parenthood past and present, but we cannot debate the results. Abortion is by no means an equal opportunity killer.-AbortionFacts.com

After understanding the racist drive of abortion, we can also understand that abortion also kills white babies. It kills babies of Asian descent, Middle Eastern, and European. The murdered are of every race and economic parentage. They are every gender. They were growing in the wombs of teen mothers, single career women, married women and women who were "done" having babies, and therefore didn't welcome the surprise of a pregnancy.

These babies were created by the Lord God with a soul and a purpose. These babies are all denied their right to life:  given to them not by their mothers, their fathers, the government or anyone or anything else, but by their Creator. They will never take a breath {unless, of course, the abortion is botched, and then they will be gasping for air until their lives are extinguished after birth}, they will never make a choice of their own. These children will never bless the heart of another with their smile, their inquisitiveness or their giving hearts.  While the woman and man who were instrumental in the pro-creation of the baby may not want what God calls a blessing, it is a guarantee that there are hundreds more mothers and fathers willing to love and raise the child. That baby, that abortionists call a "blob of tissue," is only a short time away from merely wanting to be held, loved and cared for. Instead, they are burned alive, dismembered, and their skulls crushed.

Women who have had abortion and regret it, find it difficult to move beyond the abortion. For the remainder, they often become the statistics that show that most women who undergo abortion, will have more than one in their lifetime.  Statistics show that 45% of all abortions are for repeat aborters. The claims that abortions are a "one time rescue," a)  aren't true, and b)  don't make the death of any of the babies any less heinous.

In our time of great apostasy, many lie about the truth of what abortion is, what it does, and the dangerous ripples that flow generations from it's sinful core. Many distort or reduce it's vicious and vile violence that is perpetrated on the most innocent among us. Many simply close their eyes. Many laugh at parallels to ancient cult followers and devil worshippers who kill their own children.  Like the ancient worship and child sacrifice to the "god" Molech, our sons and daughters are sacrificed on the altar of self worship.

One of the practices of the cult that worshipped Moloch was to sacrifice their children.   Of course, this was forbidden by God's word: Leviticus 18:21 says, "Neither shall you give any of your offspring to offer them to Molech, nor shall you profane the name of your God; I am the Lord."  {See also Leviticus 18:21; 20:2-5; 2 Kings 23:10; Jeremiah 32:35}

In some passages the reference is clearly to a deity to whom human sacrifice was made, particularly in the Valley of Hinnom on the SW of the Jerusalem hill {2 Kings 23:10; Jeremiah 32:35} at a site known as Topheth {‘fire pit’ in Syriac}.1

The ancients would heat this idol up with fire until it was glowing, then they would take their newborn babies, place them on the arms of the idol, and watch them burn to death.  I can't help but compare today's abortion massacre to the sacrifice of children by these ancient pagans.  In both, innocent life is destroyed for the gain of the parent.

I can't help but compare the 40 years of "legal" infanticide to the sacrifice of children to pagan 'gods', either. While the abortion supporters celebrate their freedom of choice in January, be assured, God is not going to remain silent on the slaughter of the innocent forever. A nation who sacrifices it's children is a nation who has lost God's protection and favor. Thank God we are judged according to our own hearts, and not as a collective nation, for those among us working to end abortion, and crying tears for the innocent lives lost, we can feel hopeless in a sea of murder. Fear not, God sees the hearts of those who are repulsed at the culture of murder of the pre-born. Their wicked celebrations and altars of false gods of self, will not last forever.

He that justifieth the wicked, and he that condemneth the just,
even they both are abomination to the LORD.
Proverbs 17:15

..lest they drink and forget what the law decrees, and deprive all the oppressed of their rights.
Proverbs 31:5

Woe to those who call evil good and good evil, who put darkness for light and light for darkness, who put bitter for sweet and sweet for bitter.
Isaiah 5:20

And many will follow their destructive ways, because of whom the way of truth will be blasphemed. By covetousness they will exploit you with deceptive words; for a long time their judgment has not been idle, and their destruction does not slumber.
2 Peter 2:2-3